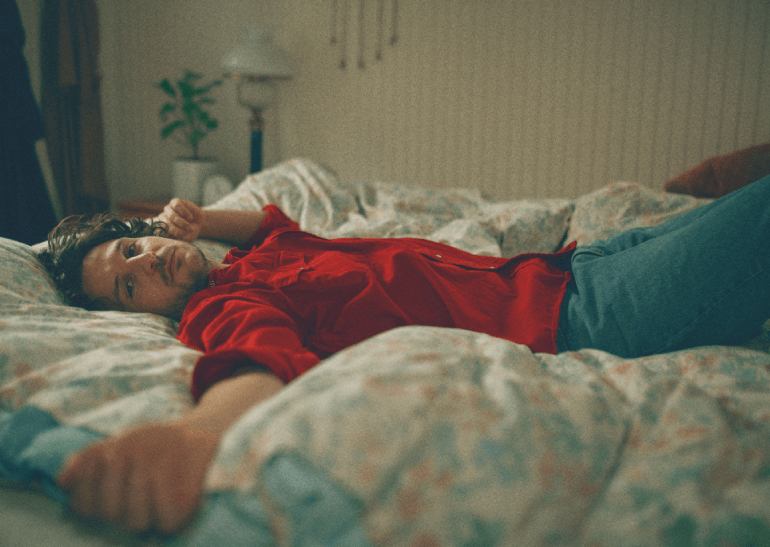 It’s the end of January and the most dreary parts of winter are over – that means it’s time for some indie pop and therefore time for Favor (alias of Jeppe Gade). After he had a busy last year, releasing music and supporting both, the Norwegian pop sensation Sigrid and the indie darling The Japan House, he is kicking off the new decade with his new single “Feeling Something”. Before he will head off for a spring tour, we were lucky enough to sit down with Favor for a little interview about the background story of his new track and his upcoming debut album. Enjoy the read!

Good because Danish: Your new single “Feeling Something” has just come out on 24. January. Would you share a bit more about the story behind the song?

Favor: The past few years I’ve done more and more co-writing with other songwriters and for other artists and it’s been amazing. What often needs to be very clear in these types of sessions is the concept. That’s what the A&R spends a long time explaining to you. Segment, listeners, target group, mood when listeners play the song, all that stuff. I always liked it because it makes it easier to imagine who you’re writing a song for. But after having done these types of sessions a few times I realised that I don’t need my own songs to be good concepts. I need them to be my songs, made from my experiences, about my feelings. I don’t mean that the music, therefore, is self-centred. I am positive that the words in a song like “Feeling Something” will resonate with other people because it’s about a universal emotion. It’s about thinking before you speak. I often get told to think a bit more before I open my mouth. But in “Feeling something” I argue that the opposite could be just as important advice. Especially, if the person you wanna keep in the room is on her or his way out the door and you’re feeling something.

The choir of the track is done by Astrid Cortes (Shy shy shy) – How did you come up with the collaboration?

I never seem to miss a chance to tell people how big of a fanboy I am about Shy Shy Shy and Astrid’s writing. I love that band and saw them at Roskilde Festival ages ago. After running into her on a night out some years after, we started doing a couple of things together and even did a full-on Grease-like duet on my last EP (Chemistry of 404, Friends and Lovers). After that, I got to do a few gigs with Shy and invited Astrid in the studio to sing on all of the songs that are coming out this year. On top of that, she is also playing in my live band on the Spring tour. Exciting!

Talking about inspiration – you’ve moved your studio out of Copenhagen, in the countryside. Would you say you needed the peace of the countryside to write and compose?

I can’t remember who said it, but there’s this quote about writing that I really like. It goes something like: “There’s only one good book in every city you live in”. What I read into this sentence is her talking about how writers and songwriters for that matter in some way are inspirational vampires where we tend to take everything we can from any situation, relation or location. We swallow it raw and therefore we need to change the scenery. There’s only one good book in every city. So with this bunch of new songs I took that notion quite serious. After doing two EP’s in Copenhagen, I made this simplistic studio setup in a cabin about an hour outside the city. There were space and quiet and it really did something for how I write songs. What was also interesting was how the train ride up to the studio became an inspirational spot as much as the studio. “Feeling something” is written on the train on one of my first trips up there.

What else inspires you when writing your songs? Do you usually come up with the topic, lyrics or melody first?

That question always turn knots in my head, because it’s such a weird process of coming up with music. At least it is for me. I have a constant flow of words and sentences in my notes app and mumbling melodies on my memo app. Once in awhile I sit down and try to get those two worlds to meet. That’s how most of my songs are written. But on one or two occasions the melody and the lyrics just appear in front of you. It’s rare, but it has happened.

You mentioned that creating music is a very ego-centred process. How do you feel this affects your relationships with friends, family and loved ones?

For me, I think there’s a big difference between ego-centred and self-centred. The latter having a real negative vibe to it. But ego-centred means that you kind of absorb the impulse of your surroundings and let them reflect inside of you. So if I’m writing about a break-up that didn’t necessarily happen to me, I will try to write from how I feel about breakups and possibly grab some glimpse from breakups that have happened to me. So when I say that it’s an ego-centred process it basically means that it’s cause it all runs through me and that notion can sometimes be really overwhelming.

And now, not only your single is out, but you are also preparing your spring tour. How do you usually get ready for touring, any special routines?

The sole reason I make music is to play it live, so my preparation only consists of trying to control the excitement.