Fusia: we love being able to get our music out into the world 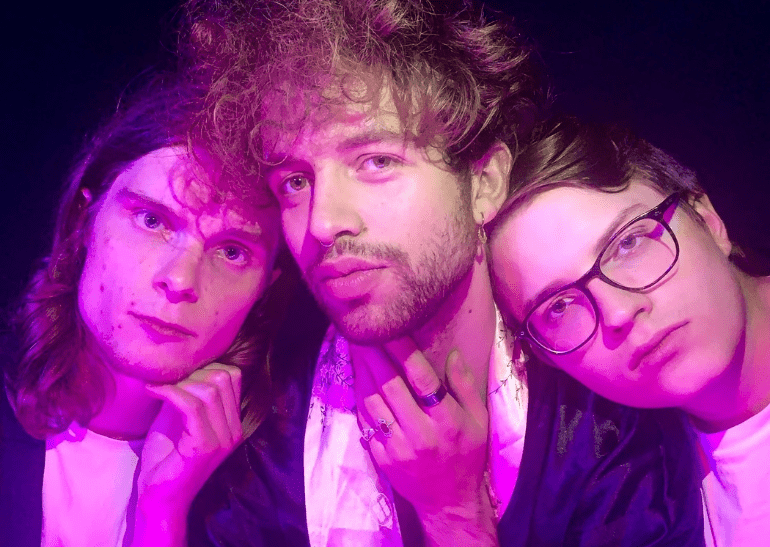 Fusia are three guys from Copenhagen, who released their second EP “Ebony” on 22. October. The band brings an ’80s vibe to life, while refreshing it with modern beats and contemporary arrangements. If I had to put this into a genre, neon pop seems to be the most appropriate way to describe Fusia’s music. “Ebony” consists of five tracks with a beautiful interlude, catchy hooks and relatable lyrics.

At SPOT Festival 2021, we took the chance to see them live, and it was a perfect party! No matter the rain, Fusia were radiating so much positive energy. Clearly, the band was happy to play live again, and the audience was delighted. From flower decorations and a big “FUSIA” neon sign to fun dance moves and joyful stage presence, everything fit together perfectly. One of our definitive highlights from this year’s festival.

We sat down with singer Kristoffer Rander to get to know Fusia as a band and discuss the stories behind “Ebony”.

How did you three meet?

Kristoffer Rander: Simon [Jepsen, keys] and I got to know each other in 2017 through a Facebook group for musicians. Simon wrote a post calling out for musicians wanting to form a Coldplay-inspired band. You’d never expect anything real coming out of this Facebook group, most of the posts never lead to anything, but this one certainly did. We found two other guys and formed a band called White Bloom, but after some time we split up. We decided to keep on with the project and met Mads [Appel, bass] at the music school he and Simon went to at the time. Soon after, we started Fusia.

How does it feel having your second EP coming out?

With this new EP, we tried experimenting more with our soundscape compared to our debut. We’re pretty excited and a little nervous to see how people will react to it. We’ve tried both going even more ’80s as well as more rock-oriented. However, we already played all the songs live and got amazing reactions to all of them.

Which modern or older musicians do you look up to and why?

The 1975 are incredibly cool, and we really look up to them both as artists and as human beings. Radiohead are another band that we look up to in terms of discovering new sound territories and experimenting with new technology. We’re also truly amazed by The Rolling Stones and how they’re still touring today. We’d love to still be touring when we’re 80.

Where do you get your inspiration from?

Our soundscape is quite inspired by The 1975. We love how they’re experimenting with transcending genres and fitting it all into one universe. Another artist we get inspiration from is The Weeknd and his ’80s synths and vocal productions. We’re also quite inspired by a Danish band Liss with their production and song structures. Most of my lyrics are inspired by my life and my reflections on it. Lately, I’ve been looking into the postmodern types of relations: how we interact through social media, how me and my male friends express masculinity and what is expected from us as lovers and individuals.

Your songs are based on real events. Is there one that’s especially close to your heart and you’d like to tell us more about?

That would be the first song on our new EP — “Run Out”. It’s about how people don’t respect each other enough when dating. I sometimes feel extremely disrespected, and I’ve learnt that some of my male friends experience the same things. “Run Out” is about this girl I was dating, and things were getting quite serious. Suddenly, she stopped all contact without breaking it off or expressing any kind of rejection. No messages, no calls, nothing. Two weeks later, I discovered a photo on her Instagram featuring her new boyfriend. I got really angry and frustrated. Was I not even worth a rejection? I was truly disappointed with both myself and her. Should I have seen it coming? For some, it might be difficult to reject people, but you could at the very least send a copypaste message. In this modern world with communication through the internet, it’s possible to ghost people without leaving a trace. I rarely lose my temper, but with this, I was filled with rage, disappointment and sorrow. That reflects in the soundscape of the song, which is quite different from the rest of the EP.

One that struck me personally was “Hate In Stereo”. What would you tell someone who is being bullied? What have you learnt since that time in pre-school?

There are many ways to survive bullying. A mechanism that helped me a lot was owning it and not caring about what others thought of me. Yes, I was different from the other kids in my class and yes, I was weird to them. In that way, some of the psychological parts didn’t get to me, because I didn’t need their approval and acceptance. I did the things I enjoyed, found communities outside of schools, reflected on myself and what kind of person I would like to become. But, as a guy, most of the bullying had a physical aspect to it. I was advised not to punch back when I was being targeted but to walk away. Retrospectively, I’m not sure whether that was the best strategy. I’m really against physical violence of any sort, but I heard from others who got bullied that standing up for yourself the first time scares the bullies away.

I would tell people who are bullied that they might not be like the other kids, but someday they will move on in life and find someone likeminded who will understand them. I would advise not blaming yourself. Most bullies are very insecure and unstable individuals who probably need help, otherwise they wouldn’t be bullying. Kids lack the emotional and ethical compass that most adults develop over time. Studies show that most bullying appears when the social hierarchy in a classroom becomes unstable. So it’s never your fault. This might sound a bit cheesy, but I’ve learnt that I’ve become stronger and more resilient after being bullied. Yet, I sometimes still struggle when I’m put into a classroom-like scenario.

Google told me that “Fusia” is Danish for “fusion”, but the word also hints at the pink flower fuchsia. What is your intended meaning for the band’s name?

Our name is inspired by the fuchsia flower, which looks artificial even though it’s completely natural. This duality is also the inspiration for our sound, which mixes organic and acoustic elements with electronic production. So, ‘fusion’ is also a perfect way to describe us.

We had the pleasure to see you live at SPOT Festival this year and were overwhelmed by your stage presence and energy. Where does this come from? Are you all natural performers, or did it take you some time to get accustomed to playing live?

We’re quite energetic individuals, so we naturally have lots of energy on stage. I used to act and dance in musicals, and there are surprisingly many similarities. Even when I was a kid, I liked to perform in the living room when my mom and dad had friends over. Mads and Simon also have a lot of experience playing concerts. But we must admit that we also had a little help along the way. Last year, we had a live performance coach who helped us build a coherent live show.

There was a group of very enthusiastic fans in front of the stage. What’s your stance on so-called groupies?

We love it when people travel around to attend our shows. But we’re a bit conflicted regarding groupies seeking a sexual or romantic encounter with a band member. We believe that a romantic relationship should ideally begin with two equal individuals, and that can be difficult if one is a massive fan of the other. This power dynamic is not a very healthy place to start off with, but we can’t rule out the possibility of it happening.

What are your plans, wishes and hopes for the future of Fusia?

After this EP, we’ll be putting together our debut album to come out in 2022. We are playing lots of concerts in the next couple months. We hope to have a proper festival summer, which hasn’t really been possible the past two years. In the longer term, we dream of headlining the Orange Stage at Roskilde Festival. We, of course, also hope that our music will transcend our band and become a soundtrack to people’s lives in both good and bad times.

What do you enjoy most about Fusia?

The moment just before walking on stage and feeling the energy from the audience, and the moment when you know a song really is something spectacular. We also love being able to get our music out into the world and seeing reactions, how it inspires and helps different people in their lives. 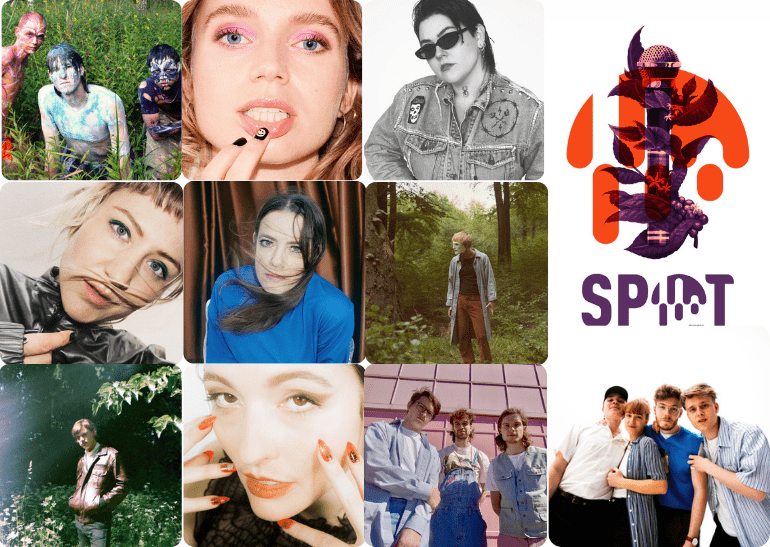 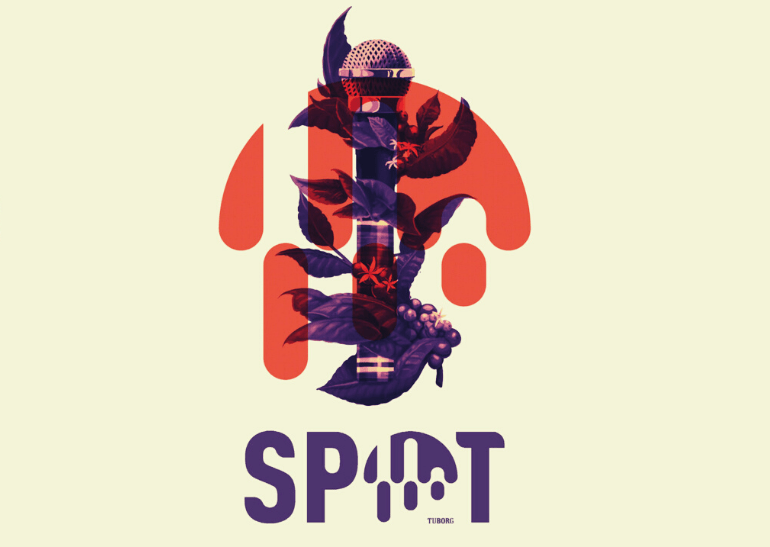