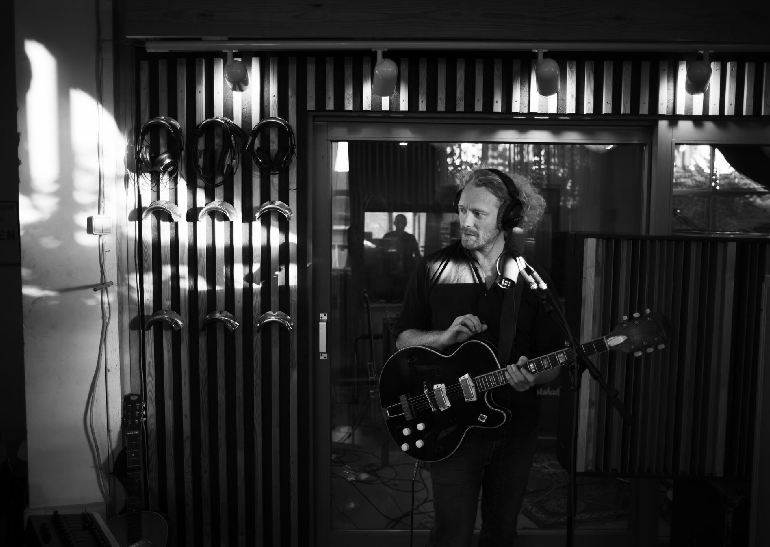 Today, we celebrate the release of “The Fumes”, singer-songwriter Kristian Harting‘s third studio album, out via Exile on Mainstream. Originating from the 90’s thrash metal and noise pop scene, Harting started going solo with more lyric-focussed music and folky-cinematic atmospheres.

“I set out to create a simple, dark, melancholic and beautiful Indie Pop/ Rock album with short ‘straight to the juice’ songs. I had this the Beatles Rubber Soul era ideal. Cut the fancy sound imagery and emphasize the songs, the vocals and lyrics.” – he says about the album.

It starts with the slow, soothing “Falling” – a song about feeling the fall but enjoying the darkness that comes with it and dissolves into it. “It’s one of these nights again, we’re out drinking” – Kristian begins huggingly. There are several songs on “The Fumes” resembling this first theme (“Weightless”, “House Of The Holy”), setting a feeling of quietness for the record.

“Lyric-wise the songs reflect my loneliness on the road and disillusion with the music industry and the modern labour market. Writing these songs I was constantly fighting the feeling of being the outsider and not really welcome in the world. A feeling of being dehumanized by society chewed and spat out.”

The second track “Rat In The Room” begins sharper, still atmospheric, but with the vocals sounding more cynical sound- and lyric-wise:

“You travel the world and you challenge the gods / but you’re all alone, all alone and you’re lost”

Kristian Harting paints the shape of general hopelessness and distrust in life’s possibilities you usually find in the music of the darkwave/grunge genres but he manages to stay folky instrumentally.

Sprinkled in-between, there are two short interludes about longing. “Clueless” is very airy and featuring husky vocals and “The Exhaust” – actually one of the strongest tracks – finally meeting the expectation (built up through Kristian’s earlier works) of very elaborate darker soundscapes, growing louder till the end.

Another instrumentally interesting one is the flowy “Fool For Change”. Five and a half minutes of love and longing, desire for someone you cannot have – illustrated by a lovely electric guitar piece of melody that is sprinkled in here and there.

Completely contradicting: the title track “The Fumes”. At the very end, it surprises with sassy vocalisation as well as honest and very clear, almost punk lyrics. Criticizing society, touching on climate change and the toxicity of capitalism, the importance of human rights even. All this, however, comes out of nowhere and thematically contradicts all the previous songs, but turns out to be a very strong, touching piece.

With “The Fumes”, Kristian Harting pictures melancholic, partially even goth, emotional landscapes. The Dane has an incredible ability to use his voice: Listen closely, no song where his singing is the same. It’s sharp, it’s soft, it’s loving, it’s angry but never empty or dull. “The Fumes” is a beautiful album, however, some of the songs perhaps lack real uniqueness and delicacy in structure.

You can catch Kristian Harting at one of his concerts during his Europe tour in 2020 with the American psych-drone duo Dasombra.