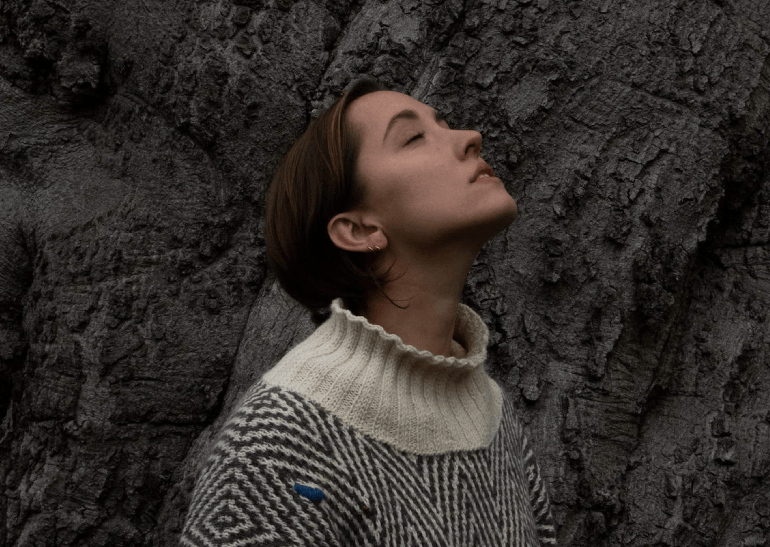 We live in times of pop-music hegemony obsessively promoted on social media. When Talitha Ferri ‘s debut single “Home” appeared in our mail-box, we knew from the very first listen that there is something special and worth sharing. “Home” is a beautifully arranged song providing a quiet corner for everyone tired of the modern world.

“Home” was released on the 6. February 2020 by Soulpod Collective, promoting Talitha Ferri’s debut album “Get Well Soon” (release date: 1. May 2020). It is a song with folk accompaniment based on the acoustic guitar. The power of this song comes from the lyrics addressed by Talitha in a very intimate and serene way.

“The song is about an exploration of the fear of – and the craving for – intimacy.  The age-old dance between two lovers bound together by the sacred oath of an unspoken agreement: not to ruin a perfect friendship with love. The gentle flutter of an aching heart, longing to heal, to hold, and be held.” – Talitha Ferri perfectly described the meaning of the song.

We are definitely going to follow Talitha Ferri’s next releases on Good because Danish. Stay tuned for her full-length album to be published on the 1. May this year. While we wait for that, read our short interview with the artist and get to know her great personality and music.

Good because Danish: Could you make a brief introduction about yourself? I found somewhere that you are a Danish-American singer based in Copenhagen. Does it mean you were born in the US and moved to Copenhagen to continue your music adventure? Why have you decided to go to Denmark then?

Talitha Ferri: My mom’s Danish and my dad is American. My brother and I were born here in Copenhagen and moved to the States at age 2. I grew up in South Florida and spent summers in Denmark as a kid. I decided to move back two years ago. I’m not so fond of Florida and frankly wanted to get as far away as possible. Copenhagen seemed like the obvious choice. There was no plan. I had been playing music in South Florida and figured I would continue that to some degree. I started with some open mics and was very fortunate to meet my bandmates, and everything since then has just kind of happened.

When did you know that music career is what you want to do in your life?

I was 16, it was literally one conversation. I had just started playing gigs at some local cafes and I was talking with my mom about the university and what plans I had for my education. Up until then I had been pretty focused on equine psychology, but had been spending all my time writing music and was earning decent money playing gigs. She asked me if I had thought about changing directions and just sticking to the music. I honestly hadn’t thought of it in that way before, but it made perfect sense. After that conversation, my plans completely shifted. If anyone asked me what I wanted to do with my life, I told them it was music.

I love folk music and I like to explore folk music from different countries. What drives you to become a folk music singer?

My connection with folk music is deeply rooted in my childhood. I was raised in a kind of pop culture time capsule. Thanks to my dad, I grew up listening to all the great folk artists of the 60’s and 70’s. We didn’t listen much to the radio. As I got older I found my own space in contemporary music, I think it was important for me to have something that was my own. But the moment I started writing songs I returned to the folk music that was home to me: Gordon Lightfoot, Joni Mitchell, Bob Dylan, etc. I don’t necessarily identify as a folk singer, but I know that’s where I fit in and that’s the music that shaped me.

You are involved right now in two projects: Talitha Ferri (solo project) and Anima & Ennui (together with Joseph Ricci). How you bring together these projects?

The four of us: Jamie Metcalfe (violin), Janus Jakobsen (bass), Joseph Ricci, and I are currently functioning as the collective/label, Soulpod Collective. In the beginning, it was just Joe and me, he was playing guitar on my songs, and I was singing accompaniment on his. We picked up Jamie and Janus along the way. We decided to release both projects simultaneously., and even though they exist in separate worlds, they have in some way become linked to one another.

We are pleased to share your new single “Home” with our readers. Is it about your “Home” in the USA or the new one in Denmark?

It’s about coming home to love. I’ve never really felt at home anywhere in my life, and I never longed for a home until I found it in a person, and in myself. That’s what “Home” is about, my journey homewards.

The single will promote your upcoming debut album. We know already that’s a personal project. What we can expect from this first full release?

I don’t want to say too much. You can expect a lot of melancholy and sadness, but also a lot of joy and healing. I like to think of it as a kind of an unintentional concept album. It’s a collection of songs that were written over the course of two years and chronicles a very personal journey I took.

We are very curious what are your favorite Danish artists? Did you explore Danish music before you moved from the US to Copenhagen?

Agnes Obel, Efterklang, Bandina ié, Marshall Cecil. To be honest I had no concept of Danish music before moving here. I grew up with a lot of Danish culture, but Danish music was not a part of it, other than the Shu-bi-dua of my childhood. So it wasn’t really until I moved back that Danish artists were on my radar.