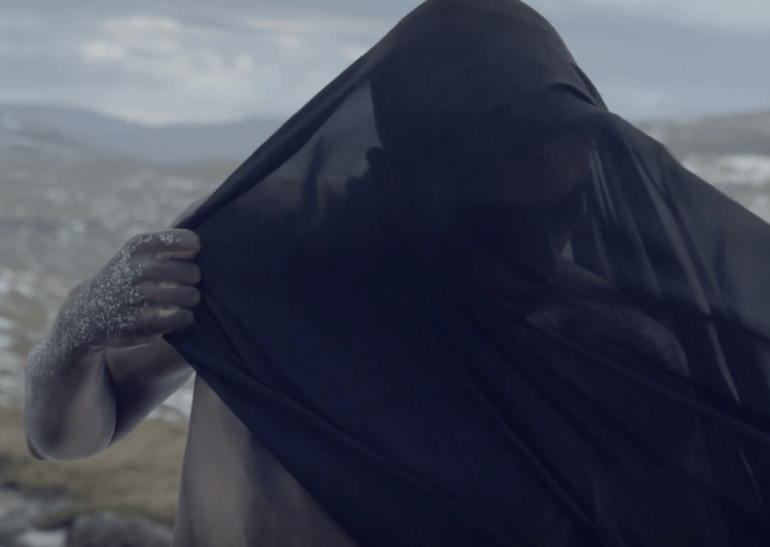 Something very special just arrived from the Faroe Islands and we are over the moon excited to share it with you. We are happy to premiere Marius Ziska ‘s music video to the new single “Falli Til Jarðar” (Faroese for “Fall to the Ground”) today! Officially releasing tomorrow on Songcrafter Music, you can already have the full experience here at Good because Danish.

Directed by Heiðrik á Heygum, the video starts by showing vast landscapes, icy mountains which portray a coldness but at the same time a certain freshness and clarity. No life seems to be in this place. Then, suddenly, you see a dancing human, skin marked with something black, maybe coal or volcano ashes. The dancer (portrayed by Thomas K. Rasmussen) starts moving, first behind and then together with a piece of black transparent fabric.

“The song has fragile yet masculine energy so I wanted to play with those two contrasts. Because not only the sound but the lyrics also refer to this – “up and down”, “falling to the ground” – and so on. So that’s why I was quite set on having a male dancer. For me, the song is about contrast and I tried to represent that as visually as possible and I think it turned out really well, considering it’s also my debut doing a dance video which I always been wanting to do.”

“Falli Til Jarðar” is a song about the duality of everything, shown nicely through the dancer and his movements. Marius Ziska sings about falling, not rising, letting yourself get lost in life to achieve the ultimate clarity of mind.

Through the song and the compelling visuals, Marius manages to make you feel like taking your first ever breath. This song, this video just feels like letting go.

If this song keeps you longing for more (like me), you can catch Marius Ziska on one of his Danish shows. He is touring from 31. January, until 15. February.