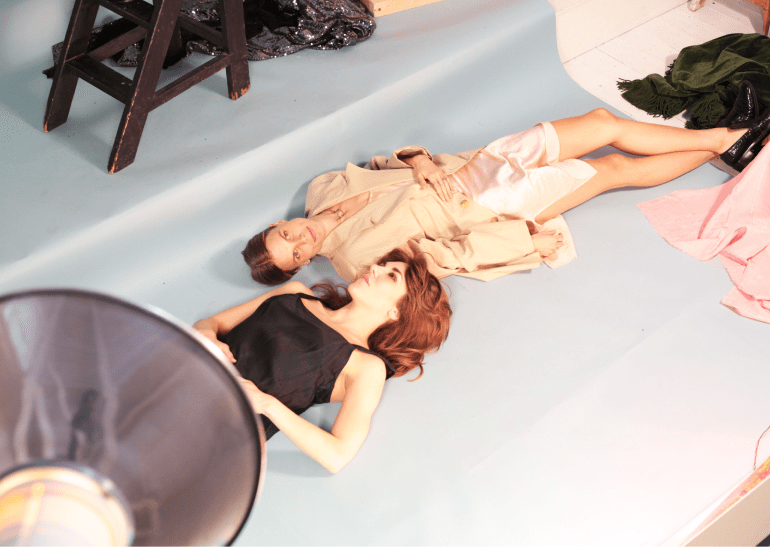 Laced with grumble and sweetness, the songs “Grandeur” and “Naked” by The Bowdashes immediately entice the listener to stay tuned for more. Curious, one afternoon we sat down at Copehagen’s Cafe Plenum with Nana Nørgaard and Linn Holm to get some insight into their universe and the debut album which is set to come out next year.

Good because Danish: The Bowdashes is pretty much a family business. How do you keep the balance between the family aspect and music aspect?

The Bowdashes: Actually, it is pretty easy because all of our family have joined the crew. Nana’s boyfriend Benjamin is the tour manager and booker, Linn’s boyfriend Mathias is the drummer. His brother Mads is playing the bass and another brother’s girlfriend Marikka is playing the keys. We are lucky that our family is so talented and we always have such a good time together when going on tour.

You have an album coming out in 2020. Can you tell us more about it?

We have evolved a lot since our debut EP “Marrow” and we naturally wanted to go in a new direction. We also tried out a lot of different things like sounds, effects, melodies and arrangements until we were fully satisfied with the songs. We produced it ourselves together with Mads and Mathias and we learned so much from the process. Also, the lyrics are much more nuanced, we think. We feel so proud and excited to release it.

How do you two know each other?

We have known each other for many years before starting The Bowdashes in 2016. We worked together at a theatre as teenagers, and at some point started writing music and playing together. Soon after, we went to Paris working with a French band Nouvelle Vague. It was pretty intense. We’d sleep in the office of the label, and every morning we jumped down to the studio in the basement to write and record.

Can you recall one experience that was particularly memorable for you as a band?

In 2016, we had just played as a support for Garbage at Posten in Odense. When we were driving back to Copenhagen over the bridge, it began to snow a lot. The truck in front of us got stuck in the snow in the middle of the bridge, so we couldn’t move on. We stayed there for 2 hours, with the Garbage tour bus right behind us and the sweet people from the band trying to dig the cars out. When we eventually got to the city, we parked at Vega, where we were playing the next evening. It was the night of the USA presidential elections, so there was a party to support Hillary Clinton. When we arrived at 6:00 AM, the last people were going home very drunk and very sad. It was pretty surreal.

If you could go on tour with any artist, who would you pick?

Iggy Pop. That would be quite fun.

What was your “album of the decade”?

It’s so hard to choose. “Blackstar” by David Bowie is definitely one. It was a great album to begin with, but it hit much harder because it marked an end and summed up Bowie’s career. It is rough and fragile at the same time; it has all the qualities you are looking for in music. Of course, the fact that Bowie died a few days after releasing “Blackstar” made it feel even more significant.

Singles “Grandeur” and “Naked” by The Bowdashes are out now via THIS Recording Company. The new album is out in 2020.