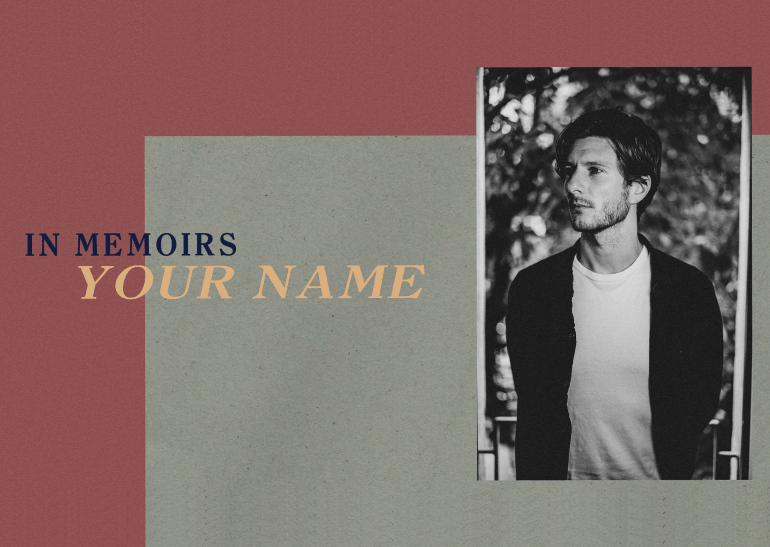 Yes, autumn is grey, autumn is dreary. But that is only, what you might think. Because every now and then you find a music gem, that brings a new verve and new dynamic in your mood. And so it happened with the new single “Your name” from In Memoirs. This is a personal solo project by Morten Fillipsen (known from The Grenadines). This melancholic, but moving track is the first single from his upcoming album “Hope, Fear & Fashion”, and it is also the first single with new music from In Memoirs in almost two years. Reason enough to sit down with Morten for a chat and learn about the stories behind the new song(s) and also a little more about himself. Read on and enjoy:

Good because Danish: On 8. November you released your new single “Your Name”. The dreamy and melancholic song is about a different kind of love story. Can you tell us a bit more about the background of the track?

In Memoirs: Breaking up is never easy. When you’re together you become a great part of each other’s lives. So naturally, when you break up there’s always a lot of doubt. Are you meant to be together or apart? “Your Name” is a song about that doubt. What should you do if your ex suddenly wants you back?

The song is the first single from your upcoming album “Hope, Fear & Fashion”. What can we expect from the album? Will there be more personal stories?

I always tap into my own experiences and thoughts when writing. That’s when it becomes real – not just for me but for the listeners I hope. My main focus is to write about feelings that origin within me but everybody can relate to and hear their own story unfold.

The song is the first new music from you since two years – what was your main musical influence during this time?

I’ve actually just been tapping into my old way of composing. Back when I was twenty or so I really liked exploring my songs while writing them – seeing where they would take me. That changed when I wrote my debut album. I was more pop-oriented and focused on writing songs that would help the listener as much as possible by being catchy.

Your debut featured the exciting time of the mid/end twenties. What do you think changed since then and how did this affect your music?

On my debut, I was chasing a dream. And I wasn’t afraid of being “too much” both in production and top liners. There were a lot of bangers on that album but unfortunately not enough listeners to match my own ambitions. Writing music on your own is a lot of hard work when you’re chasing a dream. Now I’ve come to terms with the fact that I might never “make it”. And what does “make it” even mean? The new album is about acceptance and finding inner peace with what you do. I can define my own success.

Talking about changing times and creating new music – how do you usually come up with ideas for new songs?

How much, do you think, age influences your approach towards music?

For me, it’s a lot. Life changes and thereby your priorities. I’m not in a rush anymore and that resonates into my music.

With growing older, do you look also differently at the music scene in Denmark? Do you see any major changes over the last years?

Well, the indie pop/rock genre is not very popular or commercial right now. I still look back on those glory days were bands such as Kashmir and Mew were the big winners at Danish Music Awards.

The new year is ahead – any chance that we will catch you live soon?

I’m hoping to play some concerts in May 2020 around the album release. Before that, I will do an acoustic performance at Folk and Fæstival (Esbjerg) in January together with Penny Police, Elba and Marc Facchini.