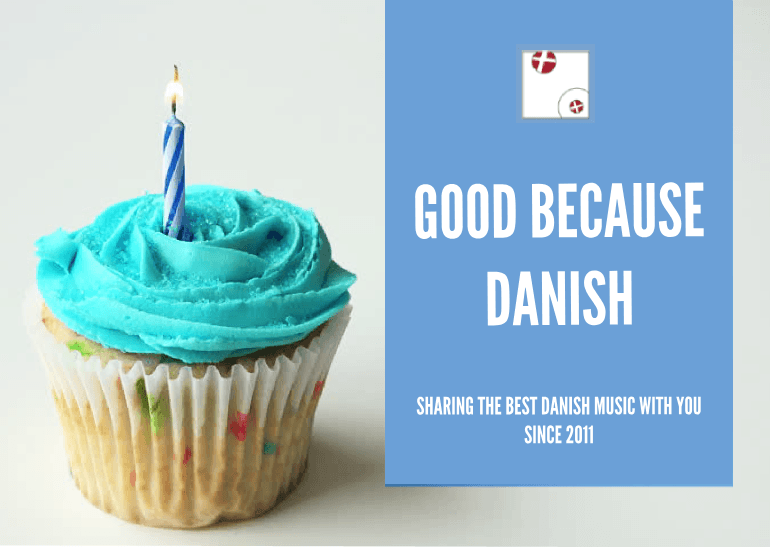 We are 8 years old! Today Good because Danish celebrates its birthday and it is a great time to look back and remind ourselves how it all started, why and how it developed.

If you follow the blog, you know already that the idea came to live in February 2011 thanks to the band called Turboweekend and their single “Trouble Is”. We reminded you that Turboweekend guys are sort of the Godfathers of Good because Danish many times. But apart from them, there are several Danish musicians which made a huge impact on us at the GbD Team and inspire us daily to keep on running this project and sharing the great Danish music with you.

As it is our 8th birthday, we want to present you the 8+ Danish acts which made a great impact on the people creating Good because Danish (we couldn’t limit ourselves to the even 8!). Read about them below, listen to their music on our special birthday playlist on Spotify and we hope you’ll keep on coming back to Good because Danish because we will definitely keep on sharing Danish music with you!

Oh Land was one of the first Danish acts I heard play live and she had me right away. She spread this very special atmosphere, connected to the audience and amazed us by touching the sweet spot between moving melodies, emotions and narrative lyrics. Ever since then Oh Land is one of my favourite Danish artists and I can’t wait for her new album coming out this spring.

There are not many artists like Line. Instead of always just going for more, bigger and the next big hype, she doesn’t only make music but seems to really live her music. Her courage to discover new art formats – like combining her music with paintings – amazes me and makes it even more fascinating to follow her journey.

The Danish music scene boasts so many creative and talented artists that it’s always hard for me to pick favourites. If there’s one name I always get excited about, it’s certainly The Radar Post. You can tell that Esben Svane lives and breathes music – the passion shines through everything he does. Whether he’s the singer on his own records or producer on someone else’s, there’s always this beautiful, personal touch that cannot be overlooked. After all, what’s the point of any art if it’s not genuine? Some tracks on The Radar Post’s latest album have this raw and sincere energy that I almost feel overprotective sharing them. But of course “A Good Adjustment To Reality” would be a wonderful addition to your music library. My favourite songs are “Pilots” and “Ladder”.

The same can be said about Carl Emil Petersen, whose former band Ulige Numre actually introduced me to the Danish language many years ago. The first time I heard their music, I didn’t understand a word but I was fascinated by the bizarre sound of a language that is so different from mine. Since then, I’ve got most of my vocabulary from Carl Emil’s and Ulige Numre lyrics, which is a very efficient way to learn! When I’m in Denmark, I sometimes forget how to count past 20, but I’m pretty sure I could recite “Kærlighed Kommer” in my sleep. If I were to move to a deserted island and could bring a player with just one song on it, that would be the one.

Ida Wenøe is one of the artists (back then as a part of the trio Boho Dancer) whom we interviewed at our first SPOT Festival 7 years ago. Since then I fell in love with her voice and wonderful character. As Ida went solo, she continues to mesmerize me with her lyrics and ability to express emotions which I also have, but often can’t put them into words. She has a true singer-songwriter soul and the way she persues her career while staying true to herself is a wonderful example that we see and try to follow on Good because Danish. The most important thing it to do what you love and to do it the way you feel is right.

When we had a chance to organize the Good because Danish night concerts along with Mona Schnell from Hamburg, Ida Wenøe was one of the acts accepting our invitation and later she performed in Poznan, my hometown, as a part of the Good because Danish line-up for the Polish showcase festival Spring Break Festival. This experience was an amazing adventure and having Ida as a companion in it was truly special.

I still remember the first time I saw Lydmor live – it was back in August 2012, at a small park in Copenhagen. She played on a “stage” which was a garden tent, it was pouring rain, but she didn’t bail and made a hell of a show for the bunch of people having fun on a summer picnic. There was something about this young woman, that worked like a magnet. Her passion and commitment to music are so strong that whenever I feel doubtful about spending my time and energy on Good because Danish, I look at her and then I know. That’s why.

It is an amazing thing to see the artist develop and Lydmor was growing as an artist alongside Good because Danish growing as a blog. When she released her debut album, she premiered every song on a different website and asked us to premiere “I Love You” on ours. It was the first ever premiere for Good because Danish. After that, a Belgian band read about her on the blog and that sparked a collaboration with them, which was another great thing for Good because Danish – to see that we do something good and really add our part to promoting Danish music. Now Lydmor is touring like crazy, released an exceptional new album, playing the biggest stages and doing all kinds of creative stuff – and I keep on observing her and thinking to myself “time spent on doing anything at all to spread the word about such amazing artist is never wasted”.

Another amazing, innovative musician that played a big role in the development of the Good because Danish project is Kill J. Julie Agaard was one of the first Danish artists I met in person when I interviewed her with her previous project Leap Over Light. When she came back as Kill J, from the very first note of her debut solo single “Phoenix” I knew this will be something special. Again, it’s because artists like Kill J I find the energy to keep on going with Good because Danish. She is a true inspiration and example of a strong, persistent woman who knows what she wants and works really hard to get where she wants to be.

Good because Danish is a passion and maybe to some it might seem like just another “hobby”, but to me, it is so much more than that. It is super fun to do, but at the same time, I see a value in it and something serious too. It’s a project which requires professionalism, knowledge and discipline which go beyond just playing around with stuff. It teaches me a lot every day, there are ups and downs, there are sweat and tears sometimes, but at the end of the day, I know it matters. So do Kill J and her work. I look up to her and am really happy to see that she is not afraid of showing the world her true, wonderful colours. With every new song, she gives us yet another reason to keep on going with Good because Danish.

Please don’t let me chose! There are so many inspiring Danish artists out there. It was not least the inspiring and creative environment of Copenhagen that makes me follow my dreams and passion and work towards their realization. What inspires me in many ways is not only listening to all the great music but to seek a conversation to dig deeper and to get to know the artist a bit better and to feel their energy. Therefore, I will choose two conversations that most resonated with me over the past year.

It was fall last year. The weather was changing and you did not know if you better bring an umbrella or sunglasses. That’s when I met M. Rexen. I love how he is able to give warmth, joy and a community feeling through his music. You should go to his concerts at least once, it is so much fun! You will be able to envision other worlds. M.Rexen made me appreciate the present, and somehow to make peace with the past, the good and the bad. Especially while doing the interview he inspired me to interact more with people of all walks of life, their experience and stories of every sort.

And then there is Jacob Bellens and Ellis May, who are more reserved as a person than you might expect. Both I find very inspiring because they use their strengths to thrive in life and to create all this wonderful music. You can feel that all the lyrics and songs that they create are truly important to them and that everything they publish is well thought through.