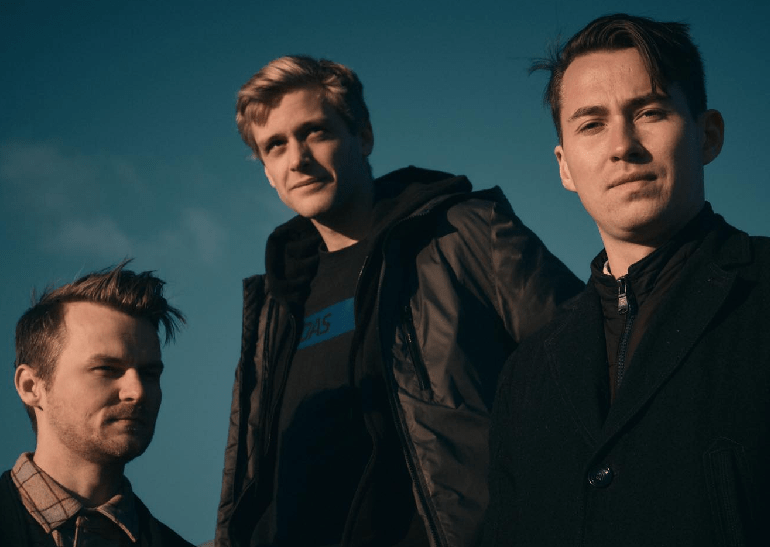 Today I want to introduce you to my latest crush—Mob War. No, not the 1989 crime drama. No, not a death metal band either. Mob War are a gifted post-rock trio: Frederik, Benjamin and Viktor, who came out with the single “Glassy Eyes” on 12. June.

Their sound reminds me a bit of my teen emo days, in the best way. No weary, american-accent-overloaded vocals, but a sensitive, passionate voice combined with unique, elaborate instrumentation. These guys really know what they are doing. Mob War’s musical work ethic seems similar to that of a Danish art-pop band Blaue Blume. Both would rather set the bar too high than too low, never be satisfied, always strive for perfection. A whole album was made and thrown overboard before Mob War finally came up with something they were happy to release. But there is good news: following “Glassy Eyes”, the band’s debut album will come out in autumn 2020! So, if you liked the single, this is something to look forward to.

Frederik, Benjamin and Viktor talked to us about the band’s roots and their new single.

How did you come up with your band name? Is it in any way connected to the 1989 crime drama “Mob War”?

Viktor: It’s not a very romantic story. I got a computer game from my older brother when I was younger. It was “Godfather”. We were discussing band names, and one day, as I was playing the game, suddenly across the screen it read “you have started a Mob War”. I thought that looked and sounded pretty cool, so there you go. But it’s funny, people tend to believe that we play much harder music than we do because of the name. It leaves a funny impression when they hear the music.

How did you guys find each other and become a band?

Frederik: Benjamin and I have played together since 5th grade. We played in a rock band until the end of high school, where we grew tired of the sound. Sometimes it became too straight-edged and often without a lot of depth. We met Viktor on MGK (a three year scholarship in preperation for the conservatory) and clicked pretty quickly. So, when the old band was about to end, I spoke to Benjamin about making a new one with Viktor. I have always been drawn to three-piece bands and wanted to try it myself. And the many years of rocking and rolling made us want to try a different approach where the limits and dynamics where in focus. After the first rehearsal we had the track “Josie” that is featured on our last record. It was love at first jam.

The song is about feeling that you are somehow always two steps behind, either your own expectations or comparing yourself to others, which we all three very much feel or have felt. Especially when you are a musician, you start thinking too much if you should just have got a job as a dentist and made good money to afford a large house…and so on. Musically, the whole thing came out of that drum pattern in the verse. We were sort of stuck with an idea and thinking too much about everything. So we decided that what we came up with from that point on would be alright. And suddenly everything came much easier.

What can we expect from your upcoming debut album?

We always try to make each song sound different from the next, and at the same time work towards a coherent album. I think David Byrne said they did the same thing in Talking Heads. And when I listen to those records, I can clearly hear every song stick out, while also working as a part of a whole. So let’s hope we have achieved that!

Sonically, we’re also very proud of this record. It doesn’t sound like it’s just the three of us making this soundscape. At least we tell ourselves that it sounds bigger than that. We always try to stretch the possibilities of what we are physically able to play as a three-piece, for better or worse, and we’re extremely excited to get out and play the new songs live.

Mob War’s album release concert will take place in Copenhagen on 7. November 2020. I am excited already, and hope I can take a little trip to see Mob War live!