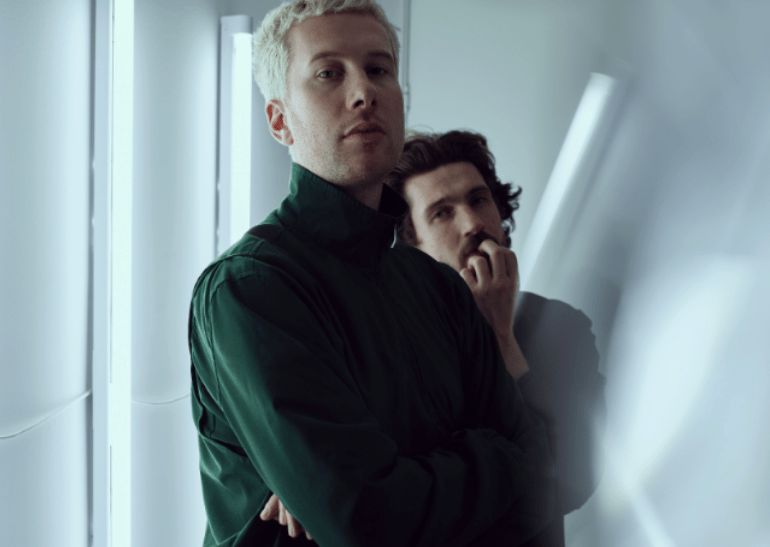 If you were to ask me “What is Fluqx?”, there’d be more than one answer to that. Producer Joel Krozer and singer Brian Della Valle. Electronica and voice. Music and visual aesthetic. But let’s start from the beginning: their debut album “Monolith” came out on 6. March 2020 (including an intoxicating track “Here”) and gave us a first insight into what Fluqx means. Sound-wise, it’s flowy electronica, mixed with the mastery of Brian’s voice blending in. Additionally, Fluqx is an overall aesthetic combining music, videography and photography to one unique artform. Learn more about the people behind this project and how Fluqx emerged in this interview. Grab yourself some hot beverage and have a nice read :)

Good because Danish: Brian, you originally came to Denmark from Canada a few years ago. What initially urged you to move to Denmark?

Brian: Serendipity brought me here. I was in an international exchange office in Canada and saw a pamphlet for Aarhus Uni. I thought of Hamlet and a book from my childhood “Numbering the stars”, I pointed at it and said, “what about there?’” It was the only uni left that would teach science in English. (Flash to two months later in Aarhus: none of the courses was in English).

You just acquired Danish citizenship. How does that feel? What does being an “official” Dane mean to you?

Brian: It feels wonderful. It feels serious and a privilege. What it means to me is yet to be discovered. It fastens something deep into the soil, changes the glass through which I see.

Brian and Joel, you’re both working full-time jobs next to your project Fluqx. Have you been able to implement some of your day-job interest into what you’re doing with Fluqx or are you totally separating those things from each other?

Joel: My day job is mixing, mastering and producing other artists so there is a big overlap for me. This also gave me the ability and to mix and master the entire record myself. Something that is not common in the record production process but I feel like it lent the record a very personal touch.

Brian: I’m a neuroscientist with an entrepreneurial bent and have my own band Of The Valley in addition to Fluqx with Joel. I am lucky enough to be spending most of my energy on things I love. They blend together but they are different expressions and so, need to be ‘of their own’ to flourish.

How did you two meet and when did you decide on being Fluqx?

Brian: I was recording an album in the studio below Joel. He’s a smoker (though starting to stop?) and a funny cat. That means he was outside the door a lot, showing me youtube videos and leaning in to hear what we were making. He has an incredibly versatile ear and is indeed a versatile artist. He asked me up to his studio and showed me the bones of what would become Fluqx. We tracked my falsetto on “Carvings”, and things took off from there.

Joel: “Fluqx” is a distorted way of referring to the word flux which to me is all about movement. When we were writing early sketches of “Vanishing Point” the term came up and we liked how it described the ambiguity of the arrangement. How the “particles” of the song could move from a state of rest to hyperactivity.

How did sound and visuals merge together for your debut album “Monolith”?

Joel: The two actually developed parallel through a decisive turning point emerged from some photographs I took in the Bolivian desert in 2018. They seemed to link up with early sketches of our tracks at that time. From there the photographs were present in each session and we were inspired by the textures, colours and vastness of the spaces depicted.

Brian: In addition to Joel’s photos, I accessed the writing to some these songs with long, regular stints to Thorvaldsens Museum. The vast, human-made objects gave me some insight into the world Joel had built musically. The writing of “Feather” came out of a painting of my grandfather’s birthplace, Ischia, Italy, painted by my cousin, a uranium miner in the Canadian outback.

What (Danish) music do you listen to personally?

Joel: The latest When Saints Go Machine album was really good in my opinion. There’s so much good electronic music in Denmark at the moment! There’s a lot of techno from the likes of Schacke and Kasper Marott that I urge everyone to listen to. Internationally I really like what DJ Python is releasing at the moment. Also like a lot of the latest Yves Tumour releases a lot at the moment.

Brian: Trentemøller’s “The Last Resort” is the record that gave me access to electronic music. I didn’t ‘get it’ until I heard that album. It is one of my favourite records. I really like C.V. Jørgensen and listen to him a lot at work, he invokes an emotion I find hard to describe. I love Tove Ditlevsen so Anne Linnet’s record “Kvindesind” is special. Palace Winter has a killer instinct that I love, Cancer released a song yrs back called “Same Color as Digital Photography” that I still think about, The core of “København” by Ulige Numre is something special, Iceage’s “The Lord’s Favourite” is visceral and beautiful.