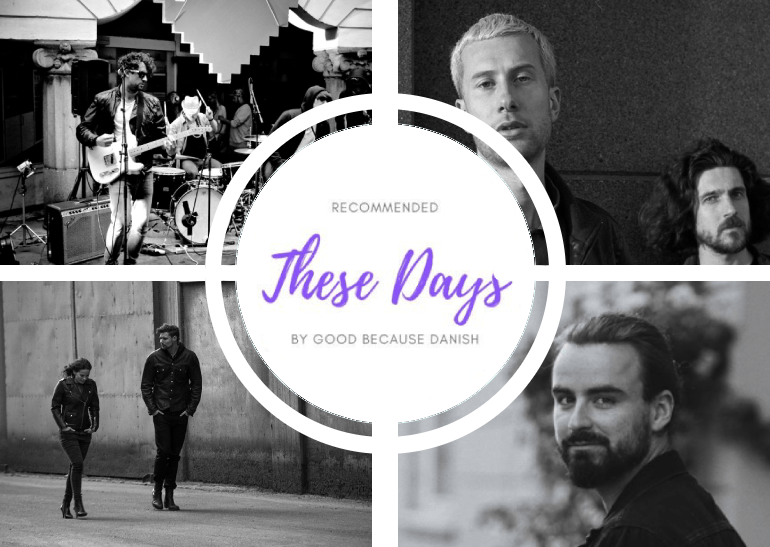 Here comes your dose of freshly baked Danish music – caution, piping hot! We have some raw rock sounds by The Shrines and Ring Them Bells, some intimate modern ballad by Alexander Woods and flowy electronica by Fluqx. Without further ado, let’s go – enjoy!

These days we listen to…

The first riffs of the Danish rock duo The Shrines caught me from the start. Distinct riffs, daring, slightly scary tonality. “Keep Calling” touches on the dark in the human – “the psychological demons that we as humans sometimes deal with”, as they state themselves. But there’s more: “Keep Calling” comes with a boney music video by Shyam Talwar, portraying the band as skeletons on puppetry strings which just perfectly underlines the circus’ish mood of the song. Out now!

In the need for something more psychedelic? Check out Ring Them Bells‘ “Favorite Gun”. It’s groovy, it’s bold, it’s sexy – I love it! The band of four creates a “dirty, fast rock ‘n’ roll song with a killer chorus and a breathless Bonnie & Clyde-like tale”. Instant 60s/70s vibe, echo-ey vocals, noisy instrumentation. Makes you want to let your hair down, throw your beer away and dance like crazy. Out 28. February (also: there’s a whole album coming in April!).

In the mood for something softer? Then “Older” by Alexander Woods could be for you (you might remember him from the premiere we had on Good because Danish some time ago). “Older – never wiser, still – all I long for is the dream I had to kill”, Alexander states heartbreakingly honest, accompanied by lovely saxophone. He sings about our fast-paced modern times and what it does to romantic relationships (don’t even get me started on Tinder culture). “In a time when everything and everyone is a few simple clicks away, it’s no wonder that ‘bound for failure’ is written across most partnerships”, says Alexander Woods. Something many of us can relate to, I think. Came out on Thursday, 12. March.

Fluqx, a. k. a. producer Joel Krozer and singer Brian Della Valle (aka Of The Valley) splash a piece of catchy electronica in here. “Here” is their fourth single off the upcoming “Monolith” album. Sparkly sounds, intensifying bell synths, Brian’s breezy, charming voice and the easy beat build-up to finally dissolve in a delightful explosion of sounds. Very pleasant, never harsh. All their music comes with delicate artwork of otherworldly landscapes, making Fluqx a multi-sensual art experience. Out now!

COVID-19 and music – stock up on vinyl, not toilet paper!