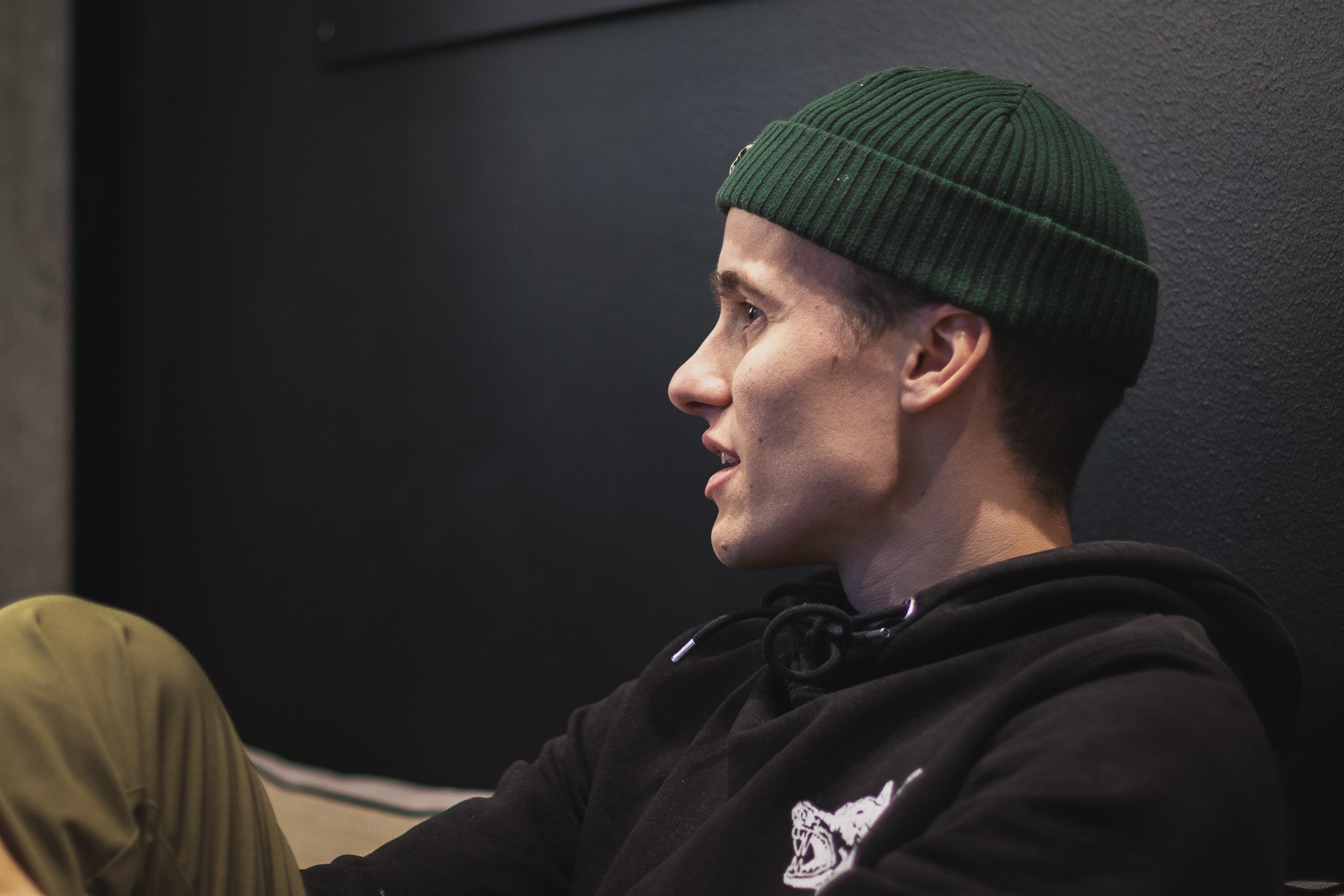 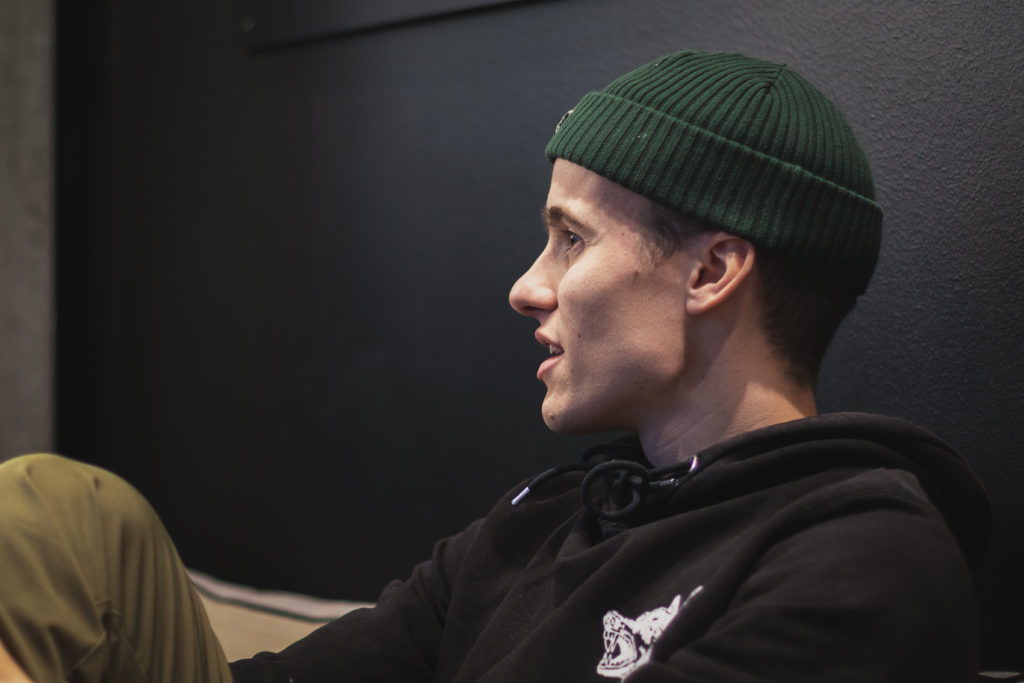 It feels cruel dragging a musician to an interview at a harbourside café on one of the wettest, gloomiest Mondays of an otherwise mild Danish winter. But to Copenhagen-based, Icelandic-born DAVID44, who started his third single “Stay” with the lyric “I miss the cold, cold North”, this is nothing. “I like this weather”, he says as he settles on the sofa to talk about his latest music. “I was in Indonesia over Christmas and New Year’s and I missed the cold, cold North there, I tell you that”, he laughs.

DAVID44 (David Ólafsson) broke through in the Danish music scene as one of VEGA’s Udvalgte, a showcase of Denmark’s most promising new artists, in 2017. He was signed to local independent label FortyFive and quickly branched out internationally with Sony and Copenhagen Records distribution deals, with his first three house-flavoured electropop singles “Talk”, “Run” and “Stay” gaining momentum on Spotify, iTunes and YouTube.

“I would never have imagined that”

This led to a full-length album, “Truth”, launched in April 2019, and along the way he supported award-winning Icelandic and Danish soloists Ásgeir and Alex Vargas, played a solo gig of his own at Tivoli’s Orangeriet, and demand for tickets saw him being upgraded from Ideal Bar to Lille VEGA for his album launch. “It’s been the most insane thing for me”, he says, reflecting on the experience.

“First of all, I would never have imagined that I would release my music, and second of all, I never thought I would get a label deal. So it was like the biggest confidence boost… And it was exhausting.”

After taking some time out to regroup and record a few demos, DAVID44 excited fans on Instagram in December by hinting that new music would be on its way after Christmas.

“It’s taken me some time to figure out what to do next” he says. “I could release a couple of singles and take it month-by-month, but I’m really into the whole working towards an album release. Some sort of product, not just single songs. It’s definitely the objective to release either an album or a prolonged EP.”

As well as penning catchy dancefloor fillers, DAVID44 has tacked tough topics such as mental health and self-esteem with uplifting messages embraced in thoughtfully written lyrics. This warm style echoes his stage presence: He smiles as he performs and graciously thanks the crowd in Danish and Icelandic, creating a festive vibe that makes people feel good – that’s exactly the aim.

“The amount of people I’ve met with terrible self-esteem is just the most devastating thing ever”, he says. “I’ve met beautiful, wonderful people who just hate themselves and it’s just so weird for me. So that’s always going to be a subject that’s hugely important to me. I just love empowering music, you know, songs that make you feel better about yourself.”

What should we expect from his new music? He describes it as a “more organic and ‘vibey’” style that shifts away from the “big pop chorus” and focuses even more on the substance of the lyrics.

“I guess the lyrics are a bit more mature with heavier emotions. Big things, like I want to have kids soon. Those are big thoughts, you know? It reflects where you are in your life, I guess, the kinds of songs you write.”

Dare to break through the domestic bubble

DAVID44 records his music in Copenhagen and Reykjavik and works with a close-knit group of Danes and Icelanders, including Maximillian producer Marco Twellmann, Los Angeles-based Sylvester Sivertsen and Icelandic talent Þormóður. He tips 20-year-old Maximillian as one of the Danish artists to watch this year.

“He is really getting better at what he does. I think he’s going to take off at some point and I really like working with him,” he says. “There are so many great artists and you have so many different categories. You have this whole urban movement. The Gilli x Branco album is just insanely well made. They’re the ones that are breaking the biggest barriers.”

Some of the barriers he’s referring to are the walls of the domestic bubble. He recognises that many Danish musicians are thriving with local audiences, but laments that only a handful of the current names (most notably MØ, Lukas Graham and Agnes Obel) are breaking through in the global market.

“Danish music has sadly been, in many ways, ruined by terrible labels. But there are a lot of cool people making a lot of cool stuff here and the music business can definitely develop a lot here.”

In contrast, he sees many Icelandic musicians reaping the benefits of a more independent music culture.

“It’s just so free there”, he sighs. “People release more music, they get more experienced and they get better at what they do. There’s no lobbying, it’s just people making music. That is so beautiful and amazing, and it creates the most honest, real music. So I actually enjoy the Icelandic music scene much more than I enjoy the Danish.”

Having a foot in two home music industries has revealed a stark contrast between the inward-looking contentment of his adopted country and the outward-looking tenaciousness of his home country when it comes to music.

“The beautiful thing about Iceland is that every Icelandic person has world domination in their genes. Danish people are a very settled part of Denmark. When I got signed to Sony, most of the plans were like, ‘How do we take over Denmark?’ ‘How do we get to P3 and P4? How do we get a Danish tour? How do we get to Skanderborg Festival or Roskilde Festival?’ In Iceland it’s all about, ‘How do we get to the States, the UK or Germany?’ The Icelandic market is so small that it’s ridiculous to think about it as the main option. It’s going to be your cash cow and your home-grown fan base, but you’re always going to think about how you’re going to get out of the country. And I kind of miss that sometimes here.”

“Cause I feel better on my own”

That’s why DAVID44 unleashed his “world domination genes” from the start, reaching beyond Denmark and Iceland by writing songs in English for an international audience. While he admits he’s still struggling to conquer Jutland, his growing international fan base affirms that he is on the right track.

“I get messages from people from all over the world and that’s just the most insane thing to me, that a person from Peru listens to me”, he smiles.

As well as working on a new album, DAVID44 produces other young musicians, does the occasional DJ gig and plans to start his own label in the future. It’s been a productive winter, he says, having started the day in the studio and getting set to return thereafter our interview.

“I have never been more driven. Winters are good for musicians and I’m writing five songs a week. Right now, the input is insane, but the output has to be optimised. And if Danish labels are not going to do that, then I’m going to just put it out there.”