Roskilde Festival from backstage: interview with Head of Programme 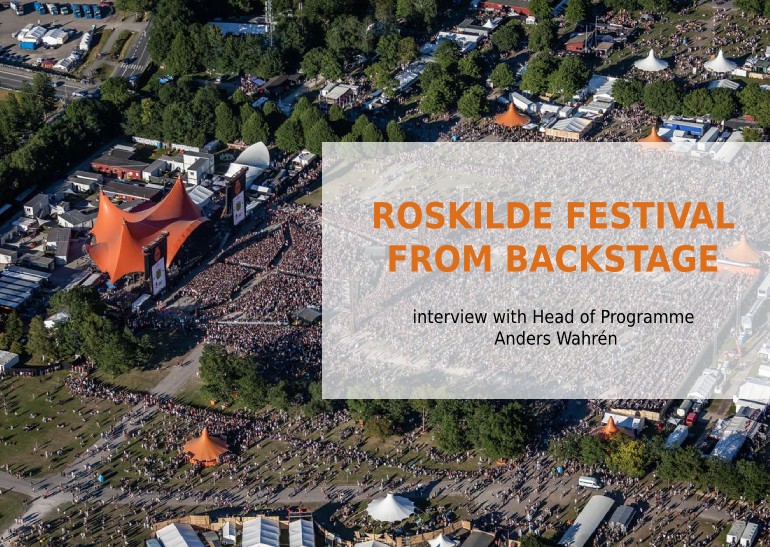 On Saturday, 29. June 2019, the next edition of Roskilde Festival will start and every music lover in Denmark, hell – in Europe – has it on their wishlist. As every year, also this time Roskilde Festival has a great line-up, many attractions aside from the music ones and everybody who’s going to experience the so-called “orange feeling” this year is thrilled.

At Good because Danish we are also excited for the event, but this year we wanted to find out a little bit more about how it is being prepared and what’s going on behind the scenes so the music lovers from all over the world can enjoy and celebrate each year. We managed to ask a few questions to a person, who is definitely one of the key players when it comes to shaping Roskilde Festival – Anders Wahrén, the Head of Programme. What do you start from when it comes to organizing a music event like Roskilde? What can go wrong? How does Roskilde manage to function so well as a non-profit organization? Find out the answers below and have an awesome time at Roskilde Festival this year! See you out there!

If you haven’t seen it yet, we invite you to see a really cool small document about Roskilde Festival – “Planet Roskilde”.

Good because Danish: How do you even start with the organization of an event like Roskilde Festival? How do you agree on a vision and adjust this vision over the next editions to fit the changing world of music and festival culture?

Anders Wahrén: That’s a great question! We plan ahead quite a lot, so while we’re gearing up for this year’s festival we’re simultaneously planning the 2020 edition. We’re a group of programmers and curators who frequently discuss visions, so we can create something coherent. Our ambition is not to present a programme where everything fits into a box, but for instance this year we have a strong focus on Solidarity that you should be able to feel when you move around the site. It is important for us that we move with the times and with our dominantly young audience.

Roskilde Festival is a non-profit initiative – which impresses us every year, considering how amazing the line-up is and how well everything functions. What is the key aspect to keep people involved? Is the non-profit thing any kind of advantage while approaching musicians for the line-up?

That’s right, we’ve donated all profits to social and cultural charities since 1972 and this along with the festival being based so heavily on volunteers in all levels of the organisation is something the artists really respect and care about once they realise it. The same goes for us internally and we’re all very proud of playing a role and making a difference whether directly for the festival participants or indirectly through donations.

What was the worst f*ck up you remember about the festival and how you managed it?

Normally we are quite good at planning and thinking ahead, so the worst situations normally arise from outside factors like weather and traffic. The good thing is, whenever anything happens our volunteers are extremely quick to respond to so, for instance, many years ago where we had a band drawing an unexpectedly big crowd at one of our upcoming stages a building crew from another stage jumped in the back of a van and drove to this stage to help the frontstage safety people out.

Can you tell us the story of the duck which is always on the top of the Orange Stage tent? 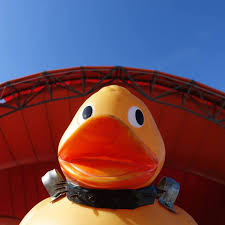 The story actually begins with a fish. Back in the day, the teams setting up the different stages had a fish mascot that they kept stealing from each other to use as their stage mascot. The guy in charge of building up the Orange Stage canopy is called Anders, and he’s known as “anden“, which translates to “the duck”. When he was put in charge, he brought his own personal mascot, the duck, and stuck it right there, top middle, of Orange Stage. It now gets a little nerdier: The duck was once stolen by the team from the Arena stage, who painted it green because that stage was once called Green stage. They had to pay for that mistake of course, with lots of beer, and after a while the Orange crew managed to remove most of the green paint, but if you look closely you can still see green remnants on the otherwise yellow duck.

What do you think is the special thing that distinguishes Roskilde Festival from other summer events?

We touched on some of it already, the non-profit aspect, but there are many things that make it special to me. Every year we have 30,000 volunteers, and they really are the backbone of this festival. The diversity in our line-up and all the way across the festival also creates a special atmosphere, and there’s a real curiosity among the festival-goers to see something they didn’t already know, which makes it even more exciting for bands and artists to be part of Roskilde Festival.