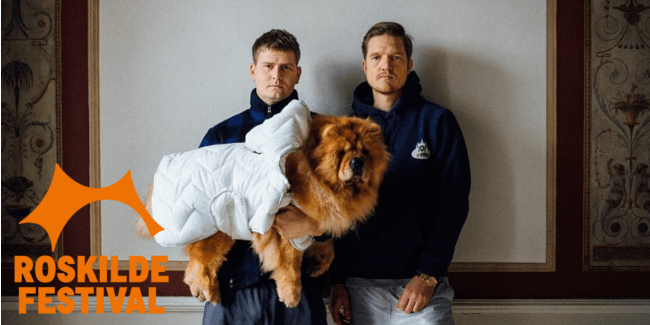 This year’s Roskilde Festival is getting closer! We’re counting down days to it at Good because Danish and looking forward to seeing the Danish bands playing during warm-up days as well as the main festival event.

To get prepared properly to the most famous Danish summer festival, we decided to question some of the Danish acts from this year’s line-up about their Roskilde experience and recommendations.

Smooth, easy-going R’n’B beats, delicate, hypnotizing vocals and a funky twist here and there – that’s Phlake’s music. The duo conquered the hearts of Danes with their debut album “Slush Hours” and live performances. No surprise that they will be playing the one and only Orange Stage at this year’s Roskilde Festival. Our author Anne Sofie had a little phone chat with Mads Bo and Jonathan from Phlake and talked about their Roskilde Festival experiences and expectations from this year’s event.

You are not just performing at this years Roskilde Festival, but you are opening the main stage Orange Scene, Orange Stage Wednesday the 28. June, so that’s pretty fucking amazing!

Many Danish artists would say this is a dream come true for them, what are your thoughts about performing on the Orange Scene?

Mads Bo: We are definitely one of those bands! It’s, yeah, unbelievable. It doesn’t get bigger in Denmark, you don’t get a bigger stage. So much history was made on that stage and we’ve both seen a lot of concerts on that stage, and had some crazy times. It kind of made us who we are in a way. For me it’s been extremely important for who I am today: This festival where you get a week during a year where everything is just okay, and everyone feels that way, so that orange feeling is just something very special!

What are you looking forward to the most about this year’s Roskilde Festival?

Mads Bo: I don’t know if that question kind of answers itself. Of course – to perform there, that’s what we’ve been preparing for the last couple of months. I’m looking forward to stepping on to the stage again and like, being something completely different afterward, maybe I realize that I’m up there, when I’m up there, maybe I won’t, but I’m just looking forward to that moment.

Jonathan: Yeah, that out of body experience when you enter that stage. Before you go there it’s just scary as fuck, but when you are on there (Orange Stage) and the show is playing, it’s just an amazing feeling.

Name the artists you wouldn’t want to miss at this years Roskilde Festival, and it can both be Danish and International.

Mads Bo: It’s really weird to say, because she is playing right before us, but a girl called Young M.A. I only know one song which is good, and I need to hear the rest, but there is a song called “OOoooOoOo”.

I will have to check that one out.

Mads Bo: And check out the video, it’s amazing! She’s just like, an original G. Oh, we didn’t recommend the third band! A band called Silvester. They are performing in the warm-up days!

What is your best ever Roskilde experience?

Jonathan: There are many! I would say when we performed there last year!

Mads Bo: I wasn’t even thinking about that, I was thinking about concerts. Like the first year, Coldplay was closing the Orange Stage in 2009, it was amazing. And I saw Bon Iver at Arena (stage) and that just blew my mind. Yeah, I would say the Bon Iver.

Mads Bo: Yeah, so I really enjoy taking care of myself. I brought a mattress and a duvet and a pillow, cause I really like to sleep. So I though if those things were in place, I could always escape and be myself or like, get the most out of it, if I slept nice, like a true princess.