FIRST HATE – A Prayer For The Unemployed 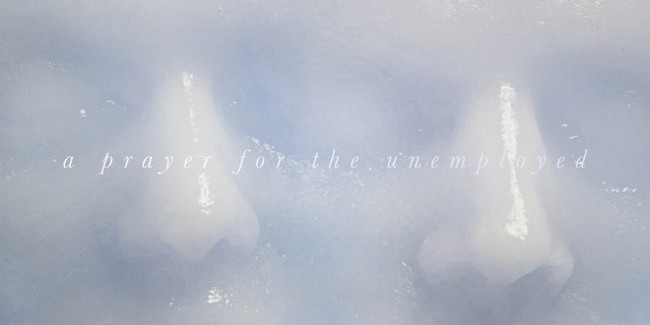 Copenhagen-based duo First Hate (the name was inspired by “someone they really fucking hate”, if you’ve been wondering) have been steadily overtaking European underground music scene since 2014 when they released their self-titled EP. Their second EP, “Mind of a Gemini” brought them even more attention, thanks to bangers such as “White Heron” and “Trojan Horse”.

First Hate released their album “A Prayer for the Unemployed” on 13. May 2017. Themes of longing, nostalgia and loneliness are central to the long-awaited debut. So full of grimly romantic and melancholic undertones, it was eloquently described by vocalist Anton Gansted as “a message of love”, but in this case, we’re facing the feelings of disappointment that stem from it. “If you think love can conquer all, try and give a kiss to a rattlesnake”, says Anton.

Cautious opening track “Bullets of Dust” pretty much sets the general mood for the rest of the album. The band even makes a point to formally invite us to “listen with love” and “sing it with pride” in the 30-second interlude “Meditation”.

Released as a single earlier this year, “The One” is quite a standout: it’s almost bursting with frustration as the narrator calls out his partner on neglect. “You treated me so carelessly, you kept imagining the one” sings Anton in a perfectly calm voice. It is a bittersweet ode to a relationship that didn’t work, something most of us will relate to, and First Hate did a very good job pinpointing those emotions.

“A Prayer for the Unemployed” has a very solid middle: here we have the uplifting title track, ultimate sing-along. The song is basically an anthem for those coming of age and getting overwhelmed by adulthood. “No no, you shouldn’t be enslaved by your mind” First Hate assure us. This one will be amazing live, so don’t miss it at Roskilde Festival 2017, perhaps the best place to celebrate being alive.
Then there’s another single – “Copenhagen”, which may well become the band’s ‘signature song‘. If you are going to listen to just one track from this album, listen to “Copenhagen”: not only does it perfectly capture what First Hate are all about, it also provides a pretty accurate insight into the city’s nightlife.

“Sometimes Copenhagen nights feel endless, sometimes they just feel endlessly boring”, confesses Anton describing the song. “I always find myself being most at home when the morning calls and I detour home through the empty city. Leaving behind some crowded bar, or flat with other drugged up strangers trying to make the night last forever. Why did I stay this long?”

It’s slightly scary how precisely First Hate managed to capture the feelings of loneliness and isolation in the modern age. You can be lonely anywhere, but there’s a particular flavor to the loneliness you experience in a city, surrounded by millions of people. You can see them, but you can’t reach them. This kind of loneliness isn’t about physical solitude, but rather an absence of connection and closeness, inability to find as much intimacy as desired. “Lonely Orbit” and “Supernumerary” will make you want to dance and cry at the same time as they flawlessly portray that uneasy combination of separation and exposure. How do you do that, guys?

The album reaches its electronic peak in “A Girl Called Friday”, explosive dance tune without vocals followed by an exitlude. A pretty neat ending.

All in all, for a debut album Anton and Joakim did an incredible job.

Listening to “A Prayer for the Unemployed” for the first few times reminded me of that feeling when you’re about to sneeze and then you don’t. But that’s not necessarily a bad thing. The realness of the record almost justifies the incompleteness – isn’t that how day-to-day life feels sometimes when you’re in your twenties?

Despite such a mix of nihilism, apathy, and exhaustion, “A Prayer for the Unemployed” gets progressively more positive towards the end. It is a strangely comforting, absolute must-listen for everyone out there desperately trying to hold on to youth and be a responsible adult simultaneously.

We liked this record so much that we’ve decided to discuss it with First Hate prior to their show in London’s glittery MOTH Club on 27. May. Stay tuned for the upcoming interview!

“A Prayer for the Unemployed” album is out now via Escho Records.