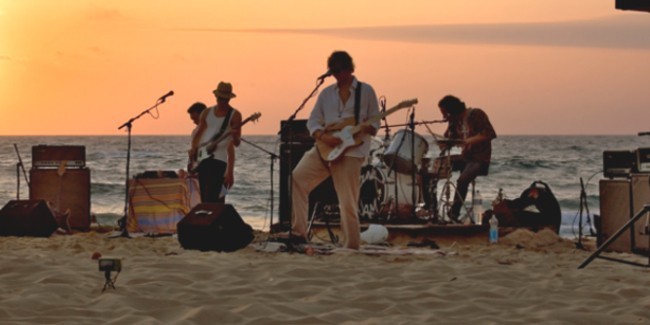 Denmark is a home of many talented musicians and you cannot find a genre we could not show you a Danish band that is extremely good playing that what-so-ever music style. Denmark’s psychedelic rock scene is full of bands that make world-class music and are pioneering in creating psychedelic pieces. So here is the plan. We try to collect the very best of Danish psychedelic music bands for you in this series of posts titled: “Danish Psychedelia”.
We start with a very special one…

Not accidentally the first one in this series is Causa Sui. The band works intensively to make perfectly mind-blending stoner rock. In the last twelve years, Causa Sui has released twelve albums, including session albums. All this hard work shows that Causa Sui takes the job to create quality psychedelia from Denmark seriously.

The band formed in 2004 by four musicians who had their own hardcore metal bands before. After experimenting with the progressive rock Causa Sui released their second album “Free Ride” in 2007. It became quite popular in the psychedelic and stoner rock scene. From this year the band plays only in the style they can truly represent the most and they gave up making their music for the large audience of commercial radio stations.

Each year the four-piece band came out with a mesmerizing psychedelic jam album, except the year before they made their big hit. Year 2013 was the year when after 12 months of silence the band dropped an album “Euporie Tide”. The album consists of shorter separated tracks instead of the lengthy deeply stoner songs.

Before “Euporie Tide”, the band released mostly long pieces that sound like well-captured jam sessions. Despite the change of the album arrangement, the music stayed as it should be: full of jazz influenced tunes with heavy stoner-rock elements and psychedelic sound effects.

To follow the tendency of releasing an album each year, Causa Sui released two session albums in 2014. So they could lay back and create “Return To Sky” in 2016, which might be the most mature and extremely unique progressive psychedelia coming from them so far.

We’re still at the beginning of 2017, but Causa Sui already gave us the “Live In Copenhagen”. The album captures two live performances: one in Copenhagen’s Jazzhouse venue and the other – at a well-known underground venue in Dragens Hulen. Since it’s rare to see the band on tour, listening the album might be a good chance for anyone who wants to hear how Causa Sui creates music in a non-studio environment.