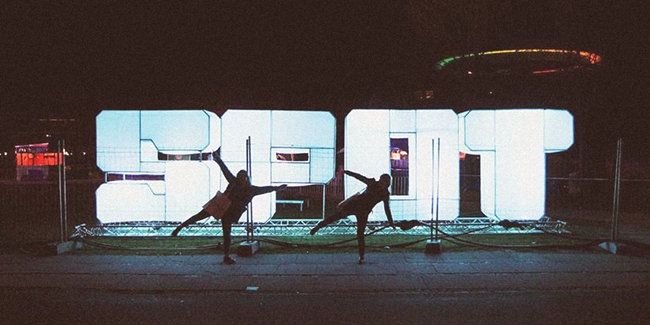 After an exciting weekend spent at SPOT Festival in Aarhus, filled with great concerts as well as lovely known and unknown faces, we now put order into all amazing experiences and musical impressions to set up a little post about them. Here we go: Good because Danish at SPOT Festival 2014 – Day 1!

Before SPOT Festival 2014 officially started though, we managed to catch the Nelson Can release concert on Thursday night, 1. May. The three ladies had also invited Lydmor and The Gang OK to play. Sweet Lydmor played a lovely show at the crowded HeadQuarters: her bare feet, nymph dress and wonderful voice took us to some other universe for a moment. Then Nelson Can conquered the HQ audience with material from their new “EP 2”. This powerful performance showed how the ladies have been improving their live music since the last time we had been able to see them. A great opening night in Aarhus!

We started SPOT Festival on Friday, 2. May, with Broken Twin. She had just released her debut album “May” and was performing the new material in a very special setting – with a full band. Melancholic music, the monumental Store Sal of Musikhuset and the “big” sound that the songs got by being played by the full band were all in all a bit overwhelming and a heavy start of the festival.

After this sort of kick-off we needed something to balance out the musical experience, so we went to catch Lovespeed which turned out as a very good decision. Seeing a band having fun on stage always makes you smile if you’re a music fan. Seeing a band which can pass their joyful mood on to the audience is even better!

Also, one of the bands we had added to our recommendations prior to the festival did win us over with their performance on Friday afternoon: The Attic Sleepers, who played among the finalists of this year’s KarriereKanonen in Musikhuset’s packed Filuren. The likeable guys made the very most out of their really short set in the KarriereKanonen line-up (a shame that those slots only last about 15 minutes!), convinced the Jury and got into the Top 8, who will be playing at this year’s Smukfest.

Another highlight of Day 1 – especially due to its amazing venue – was the premiere of Anders Stochholm’s solo-project The Portuguese Man of War up in the infamous Rainbow roof of ARoS, Aarhus’ Museum of Modern Art. A true multi-sensual experience which was not only appealing the audience’s ears with so-called “pacific electro”; Olafur Eliasson’s art work let the city appear in monochrome filters and make the whole body sense how differently we perceive different colours.

Each year at SPOT Festival there are events like no others. Another one of those special concert experiences was “Nordlyd”, where Mikael Simpson, Norwegian Ane Brun and Swedish Alice Boman shared the stage in Musikhuset’s Store Sal with an orchestra. After this show we re-fell in love with Mikael Simson, whose voice fit the huge sound just perfectly.

Something completely different, but on the list of our highlights as well; the massive show Reptile Youth delivered at the SCC stage! The songs from their new album sounded even more energetic than on record, the whole concert got a totally surprising shoot of tension because of the amazing lights, the band was 100% in top shape. Once again Reptile Youth confirmed that if they play a concert – you simply can’t miss it, because it will definitely be something huge.

Sekuoia – 3 guys in black sweatshirts, tasteful visuals at Godsbanen’s Rå Hal and an as tasteful dose of electronic music, played with devotion and passion. What’s not to like?

A concert we – and according to the long line in front of Musikhuset’s Lille Sal, also many others – had been waiting for in high anticipation was the one of Blaue Blume. And this hyped show did not disappoint the slightest bit: the four talented guys fascinated the packed place with a theatrical performance, supported by a modest setting, suiting lightning and nearly musical-like gestures of frontsinger Jonas Smith.

During the first day of SPOT Festival we visited Voxhall twice: earlier during the day, to see the wonderful, always great alcoholic faith mission – who reminded us of how much we really like their music – and then, later, to experience a special concert of Bon Homme + Lydmor with some seriously awesome visuals and some seriously good music. You know how festivals and running from one concert to another can be tiring? Well, we forgot about it when these two shared the stage and played “Daybreaker”. They were like the best combination of female beauty and male chic, both visually and musically.

The last act we caught on the first day of the festival was Kill J – and it was definitely worth the wait! The duo made the audience at a filled Radar bounce and dance and love the music from the very first second. The concert showed how unique and how unexpected Kill J is. You never know if they will surprise you with vibrant vocals, pop’ish keyboard tunes or heavier hip-hop beats. Watch out for them, because they will go far – we hope so at least!

Besides the official line-up of SPOT Festival, Aarhus is always buzzing from many inofficial, off-SPOT events throughout the days (and nights) – worth mentioning the pop-up shows of Quick Quick Obey and Ida Wenøe (Boho Dancer) or the surprising take of Mother Lewinsky’s Marc Facchini on being a street musician.

Find a few more visual impressions of SPOT Festival 2014 on our Instagram @goodbecausedanish – and soon on the blog!