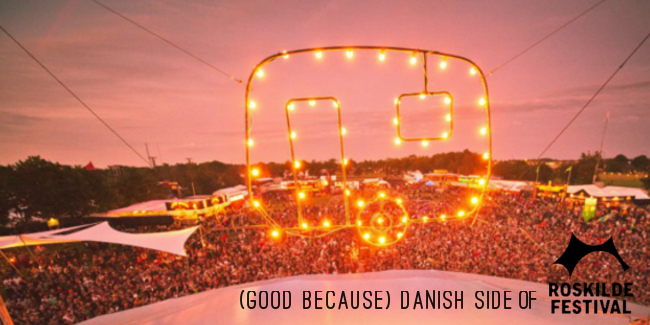 Roskilde Festival 2014 is getting closer. This year Good because Danish decided to focus a bit more on the “Danish” side of the event. The festival is one of the most prestigious, well-established and most recognizable European summer events. Year after year, it delivers great line-up’s filled with big international names (this year the main headliner are The Rolling Stones!). However, Roskilde Festival also makes space for Danish bands to show themselves to the world.

In the past years the festival opened a special stage for upcoming Danish bands – Pavillion Junior. This was the place where many Danish bands made their first steps onto the big scene, many of who are now well-known acts, reaching audiences beyond Danish borders.

This year the organizators changed things a bit: the stage for Danish upcoming bands will be set up in the camping area, is now called Roskilde Rising Stage and is connected to a wider project under the same name. The initiative is not only working during Roskilde Festival itself – by helping upcoming bands with their shows – it’s also promoting Nordic music before and after the festival by organizing concerts and events where people can get to know the artists better.

Good because Danish spoke with the project manager of Roskilde Rising – Tommy Andersen, tried to catch the spirit of Roskilde Festival’s Danish side as well as to understand what it means for young Danish bands to play at this amazing summer event.

As Tommy Andersen explains, is Roskilde Rising “a development project for the bands, that have already been booked to play the Rising Stage (previous Pavillion Stage). The idea is to get as much as possible attention in the media, for all the bands in the program, before the actual festival. We do this because the bands we book for this stage are mostly, with a few exeptions, upcoming and unknown bands in the business.

The bands have to apply to join the Roskilde Rising program in order to ensure, that the bands have enough motivation for the program and also to make sure they put all their energy and ideas into it. When a band has been chosen for the program, we sit down with them to carefully plan out all the activities before, during and after the festival.”

It’s a hard task to choose the bands who will get the honour of being a part of Roskilde Rising. It requires a lot of work and “we choose the acts by carefully exploring the upcoming scene in Northern Europe all year round. The bands we choose are very different. Some have already released one or even two albums, and some are totally unknown and unreleased, so there’s no recipe”. The variety of included projects gives an additional quality point to the initiative: you never know what names will come up, but you can be certain that they were well-thought out, carefully selected and that they bring something unique to the music scene.

The cherry on top of being an upcoming band in the Roskilde Rising project is of course a show on Roskilde Festival’s scene! “The concert at Roskilde Festival is a huge opportunity in itself to perform for an international audience and not least for the international press, that are present. When a band has performed at The Roskilde Festival, it is usually an important eyeopener to other festivals  and venues around the world”, says Tommy Andersen.

Last year, in 2013, MØ played the upcoming bands’ stage and the “house” was full, in 2012 Rangleklods played a full-tent show in the middle of the day, at noon. What is the phenomenon of upcoming Danish bands, that even though there are “superstars” in the line-up they can make people come and choose to see their shows at Roskilde Festival? The head of Roskilde Rising has no doubts about the answer: “The audience at Roskilde Festival is generally very curious and open to new acts. That also embraces the whole idea of the festival, which is to explore new music”.

This year Roskilde Rising co-operates with bands like Kill J, Heimatt, My Heart the Brave or Get Your Gun. Tommy Andersen’s biggest wish for the bands that will play the Rising Stage is “to make sure that all the bands get as much as possible out of their opportunity in the Roskilde Rising program and that the gig in itself will be a great experience to the band as well as the audience”.

We hope for that as well and are looking forward to experience shows of “the next MØ” at this year’s Roskilde Festival! Listen to the playlist with all 2014’s Roskilde Rising acts on Good because Danish’s YouTube channel and see the full schedule of the Rising Stage on the official Roskilde Festival website.