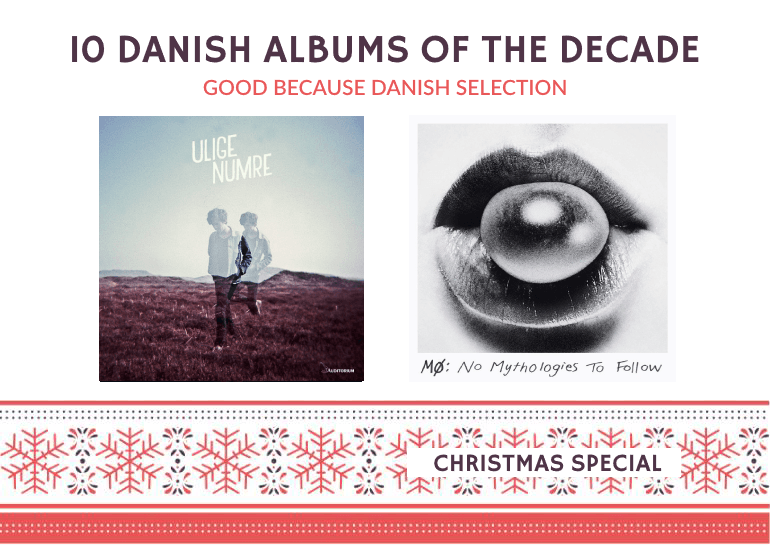 For the past 10 years, we have been listening carefully to musical exports coming from Denmark. As we are bidding farewell to this decade, let’s look back at some of its most outstanding albums. Good because Danish editorial team was trying to find those which made an impact not only in Denmark but – especially – abroad. As we look at the Danish music scene from an outsider perspective, we see some releases brought attention to the Danish music scene more than the others. We also have our all-time favourite records which are very special for personal reasons.

One day, at the very beginning of the decade, a small local band Ulige Numre uploaded a song called “København” on YouTube. I don’t think any of them really anticipated what came next.

The music video gained thousands of views overnight, “København” went on to be crowned song of the year, and the lead singer Carl Emil Petersen, who was only 20 at the time, received over a hundred thousand euro as contribution from the government for his artistic work. It was all pretty surreal.

“København”, a flawless confession of love for a flawed city, became a part of Ulige Numre’s self-titled EP. Although other songs on the EP didn’t receive as much praise, they are still really good songs which served as the young band’s foot in the door to the music scene.

There is this special balance on Ulige Numre’s self-titled EP that is often missed in modern music, including some of their later work. It is simple, but not boring. It is rough around the edges, but not unprofessional. It is the kind of record you can keep coming back to and falling in love with over and over again, just like with Ulige Numre’s beloved hometown Copenhagen.

MØ is definitely one of the Danish artists which made a worldwide impact with her music and brought attention to the Danish music scene. Her debut songs with home-made videos and edgy lyrics were truly something different and fresh, promising a new quality and new era in Danish music.

All those hopes were confirmed on the album “No Mythologies to Follow” which came out in 2014. Pitchfork wrote about it:

“The album finds MØ (…) ditching shock-rap for more mature but no less immediate electro-pop that explores the swirling confusion of young adulthood. Its sound is one that’s equally as indebted to the forward-thinking Scandinavian pop scene she comes from as it is to the sounds of Southern rap and modern bass music. It’s the kind of output you’d expect from an artist who’s grown up with instant, unlimited access to music from every corner of the globe.”

It’s 6 years later and you can still notice the impact that this particular MØ album made in Danish music. With the immense success, world-wide tours, collaboration with big names on the international music scene (Major Lazer, Diplo etc.) MØ proved that it is possible to go abroad from Denmark and make it. What enabled her – in my opinion – was the unapologetic approach and the will to put hard work and energy into coming out of the comfort zone. You can hear it in the songs from “No Mythologies to Follow”, you can still see it in MØ’s career – she has her own opinions and boldly shares them with the world.

The power of the compositions on “No Mythologies to Follow” survived the test of time. The songs sound as fresh today, as they sounded 6 years ago and the artistic maturity of MØ’s musical creations is confirmed by the sole fact that she is still out there on top of her field and still one of the most recognized Danish artists.

With this album from 2014, MØ really brought something amazing to the Danish music scene and since then many artists followed her steps, with better or worse results. Every now and then I come back to “Pilgrim” to remind myself how far this young woman got and to remind myself – it’s possible to make a difference with your work.