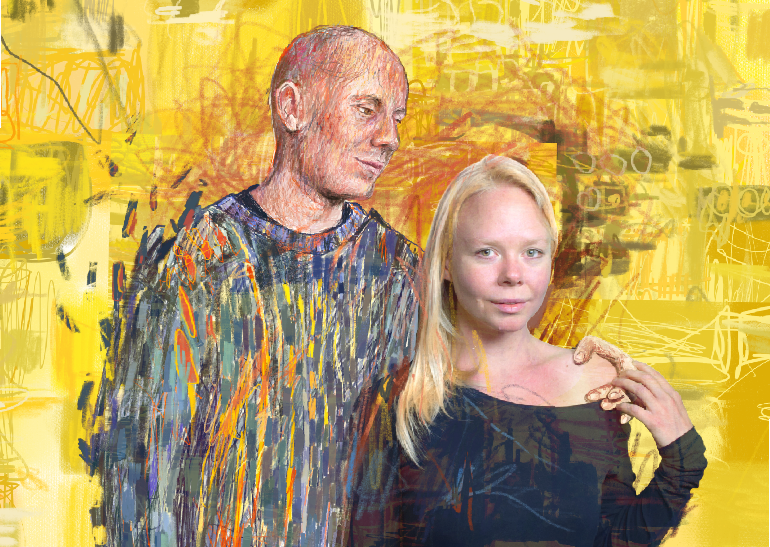 We’ve been following Line Bøgh for quite some time, have accompanied her on her solo tour as well as on her artistic cooperation with the Danish artist Christian Gundtoft. Together they started to use animated visuals alongside of Line’s songs. Having seen this audio-visual universe develop we’re more than excited to see that they now perform under the common name LINEBUG. Excited as we were, we talked to both and learned more about the new project and their debut single “Isn’t It Love”.

We’re very happy to show it to you today as a video-premiere on Good Because Danish – hit play, enjoy their distinct audio-visual universe underlined by airy vocals, hand-written animations and indie-pop melodies and get to know more about LINEBUG project from the interview!

Good because Danish: On September 13th your first single under your new name LINEBUG will come out. Exciting times! How do you feel about your very first official song together?

Line: We are so happy that we’re finally a “real band”, so to speak! We’ve been working together for a couple of years now, and it feels really good to finally have our own name. It’s just a better feeling to be a team, I think.

Line, you say, “It’s a song about the frustrations that can suddenly make you doubt a relationship and reconsider everything-“ Could you tell us a bit more about the background story of the single?

Line: It’s a song about anger. I’m a person with a temper, so I can get really angry for a few moments, and then it passes and disappears. But in these moments I can be so hateful and willing to throw away all my good relations, it’s actually really scary when I think about it. In the video, we follow two people who alternately split and unite across the canvas, and I imagine that it’s the anger and the lack of communication that comes between them again and again. That’s one of the things anger does: it makes communication difficult and it blurs out the words between people.

I imagine that this couple has started to fear the anger too, and when that happens, you have really lost, cause then you start communicating at a meta-level to avoid the dangerous subjects, and your dialogue will never be really honest. I believe that anger is a natural feeling and that it needs to be expressed, but we have different ways of doing that, different languages so to speak. But if we learn to understand each other’s language for love and anger, we’ve come a long way. And that was what I wanted to express in the song.

Christian, in this interesting combination of art and music, we would love to hear also a bit more about your creative process – what are you inspired by most? The lyrics, the rhythm, the melodies or the stories behind the songs?

Christian: Both Line and I are storytellers and I think that’s the main-engine when I create. Sometimes the story is pretty tight, sometimes it’s more abstract. I like to play around and find a balance where I can give something to the song without exhausting the mystique. To a certain extent, I’m rather conservative in my way of narrating the story, I like a clear concept that has a beginning, a middle and an end, though it might not always be so clear to the audience/viewer.

To bring the songs together with the drawings, we would assume you need to be in steady conversation about one song. How much time does it usually take to get one common art piece ready?

Christian: We do communicate during the process, but we are both perfectly happy letting the other one take care of his/her field of expertise. Too many cooks, and all that. How long it takes depends, of course, on the magnitude of the project. The music videos where I blend live-action and animation take several weeks, sometimes months, to do, but as I’m getting more familiar with the process, it’s not quite as time-consuming. But animating the way I do is a veeeery slow process, you have to love it. And have a long playlist of your favourite podcasts at hand.

Christian: I would say that these two worlds are pretty split up – as for now. But I’m interested in finding a way to merge the two ways of expressing myself. It will probably show through the coming videos, that I will produce.

Have there also been times, when it was particularly hard to illustrate one of the songs?

Christian: Mmmm … well, I’m starting to do less of the concert-illustration live on the spot, that is: I prepare videos beforehand, and at the concert, I basically just have to press “play”. It takes away some of the live-feel, but it makes it possible for me to be a little more ambitious in my visual story-telling. The latest two songs have been full of animation, so it takes a lot of time to make – but I think the result is more satisfying.

You have played in living rooms, at festivals, and lots of underground scenes and semi-official cultural houses, where do you usually feel most comfortable as a duo?

Line: We love to play intimate concerts and get close to the audience. With our setup, we need an audience that comes for the music (and not to drink beer and shout) so we love venues where the audience is seated. We like to think of our show as a cinema experience; you sit down, you lean back, and we will take you through the experience. We just need you to be quiet and enjoy it, haha.

We talked already last year about your plans to work on an album together. How concrete are these plans and when can we expect new music from you both?

Line: We have songs and videos in the machinery already now, so there will be more music during the winter. Our album is still coming together, so we don’t have a specific plan for that yet.

Line, we are super excited to see your duo work live during your next tour. But of course, we are also keen to know, if you are also planning to still perform solo in the future?

Line: I have some interesting cooperations coming up over the next year, so I’ll be spending most of my time on LINEBUG and that. I like to do a lot of different things and work with a lot of different people, and I don’t plan my career so much, so I don’t really know what’s gonna happen in the future. But I really love playing concerts, so I think I will be doing that, one way or the other.

After learning a lot about LINEBUG and their debut single “Isn’t it Love”, we’re sure you also want to see and hear it. And for all of you, who are still looking for a very special art experience in autumn – check out LINEBUG’s newest German tour dates and join them for a great evening!