IN CONVERSATION WITH: HOISON BASCOE 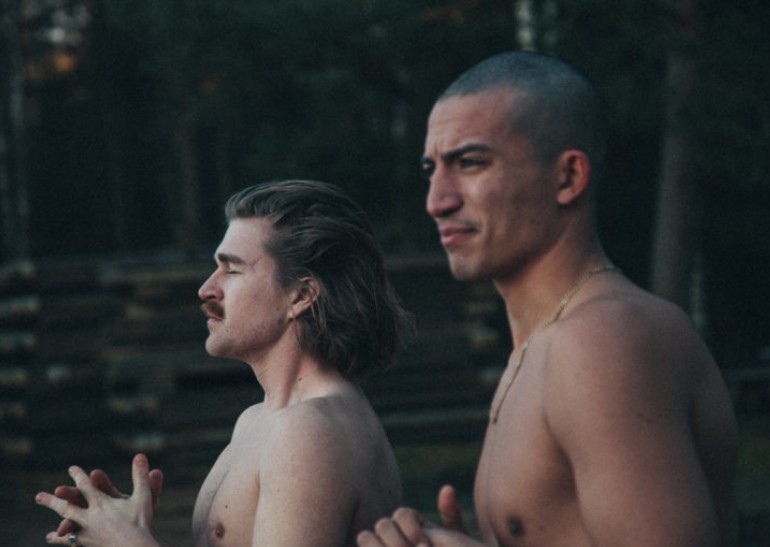 Just two released songs were enough to bring Hoison Bascoe on stage during Copenhagen Pride 2019 in front of thousands of people. The Danish duo, Arbi, and Rasmus formed their band back in 2017. Since then they have worked hard to create their own and unique electronic pop cosmos.  When we met the band on a Tuesday late afternoon for a walk in Copenhagen they talked about their energies, phones – and why they always tend to go the hard way.

When Hoison Bascoe sat down pondering over a characterizing band name, they wanted to think of a set of words that reflected their work and experience together. “The contrast between the two words Hoison and Bascoe mirror the imbalance, the daily deep dark discussions between me and Arbi” as Rasmus explains. Lead singer Arbi points at a yin and yang sign on the floor: “From the beginning, we were pulling in different directions. We had to learn how to direct our energies creating our musical universe”. Travelling to his family in Tunisia several times per year made him more flexible in mind, Arbi says thoughtful- it widens his perspective and helps him adapt to circumstances and situations quickly.

There is something gratifying about Rasmus and Arbi’s relationship. The closeness and understanding channelled in their sound – they go together in a complex interplay that sends the listener wandering along. Hoison Bascoe is the golden mean of the two, Rasmus explains.

It seems that Hoison Bascoe aims to make their music something special. Arbi sighed excitedly: “For some reason, we always tend to go the hard way. If it is not right we are doing it all over again”. Arbi laughs: “I am happy we are not a song factory. The uncertainty is fun and inspiring”.

The result, “Heihatchi“, arrived with surprising ease. The song is filled with sensuality. A desperate longing backed by piano tunes- sorrowful but yet beautiful. The third single “Deep Water Ocean” celebrates the exploration of movement and headbanging. Hoison Bascoe demonstrates their ability to draw on the widest range of music. “We can go into any direction” Rasmus acknowledged “Jazz, funk or rock. We are not stuck with our computer”. Rasmus took up the classical Saxophone as a kid and studied Jazz in his teens.

When they began to write “Deep Water Ocean”, they wanted to bring awareness to a problem of contemporary society. Rasmus explains that the “Deep Water Ocean” is a place where you can unknowingly get caught- the phone, internet or Social Media. “The past festivals we have been to, the audience’s most popular posture was crunched over, looking at their phone. You should be looking at the stage enjoying the concert” – Arbi worried.

It is clear that Hoison Bascoe just started their career: “It is fun and feels like we are going in the right direction. Maybe we have a studio someday and we can help and work with other people” Rasmus smiles. “An EP will be next” Arbis adds, “We have to figure out how we want to present the gathered material in a way that it represents us. It will take us some time until all the pieces will fall into place”.