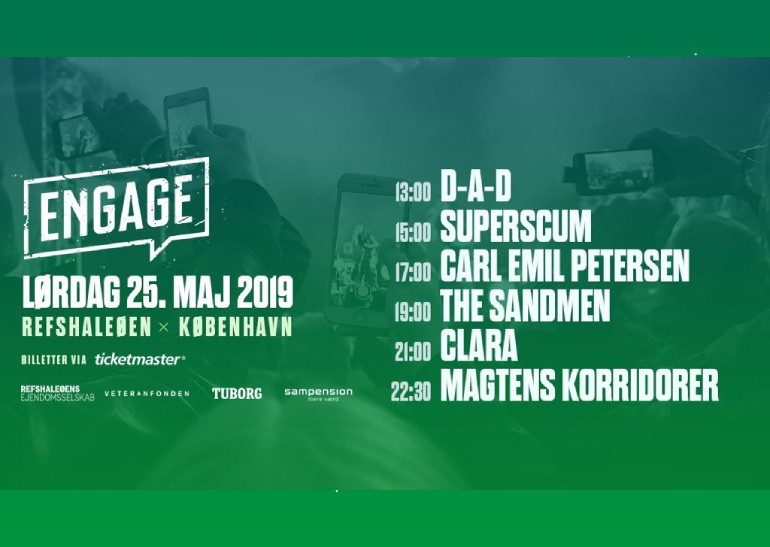 Festival season is just around the corner, but before we all take off to Roskilde, Northside and the like, let us recommend you one event with a slightly different format and a great cause.

ENGAGE Festival takes place on 25. May 2019 at Copenhagen’s Refshaleøen and is organised by The Veteran Foundation, with a goal to support Danish veterans and their relatives. This includes employees and former employees of the Armed Forces, Emergency Management, the police, and similar organizations. The profits will be donated to initiatives that work to promote conditions for Danish veterans and their relatives.

Entrance to ENGAGE is free for veterans, but the event is welcoming everyone regardless of the background. After all, what could be better than spending a day enjoying some quality music by Denmark’s most exciting acts? Let’s have a closer look at the lineup of ENGAGE 2019.

Ulige Numre may be done, but, luckily, the same cannot be said about the band’s ex-frontman. Following the release of a beautiful solo album “Natradio” in autumn 2017, Carl Emil went on a nearly sold out tour across the country. The solo album boasts hits such as “Liv Før Døden” and “Skærgården”, and it seems like the singer/songwriter is already cooking up the next one. We will certainly be hearing much more from him later!

Magtens Korridorer has been around since the mid-90’s, creating a string of Danish-language rock classics, with highlights like “Nordhavn Station” and “Pandora”. In 2014, their sixth album “Før Alting Bliver Nat” was released and regarded by Politiken as Magtens Korridorer’s best. The band has been playing at Engage Festival since its inception 3 years ago. “They were sceptical when we first asked them to play,” said the organiser Jeppe M. Jensen to GAFFA. “But when they met us, they changed their mind. After playing at the festival for the first time, they said, ‘we would be happy to play again’.”

With over 30 years of experience, The Sandmen is one of the older bands the Danish music scene. But Allan Vegenfeldt & co still rock relentlessly, live as well as on record. The Sandmen’s story is essentially that of a long-standing orchestra, with greatest hits like “5 Minutes Past Loneliness” and “House in The Country”.

At the age of 18, Clara is already regarded as a pop sensation by Denmark’s biggest media outlets. The title is well deserved, especially ever since she released her awesome debut album “August Eighteen” in, well, August ’18. Get excited for her set at ENGAGE by listening to “Slippin” and “What They Say”!

The band was formed in 2012 and since then has firmly established their place in the Danish folk/country scene. Behind the intimidating, badass looks of Superscum are five down-to-earth musicians who simply love to play. The songs with beautiful, honest lyrics are delivered straight from northjutlandic hearts, and that is why seeing them live at ENGAGE should be an unforgettable experience.

D-A-D have been Denmark’s ultimate rock-live band since 1984 because they excel at both the heavier rock genre and melodic ballads. They are known for their outstanding shows with jaw-dropping light effects and props. The major breakthrough for the band happened in 1989 with the single hit “Sleeping My Day Away” from the album “No Fuel Left For The Pilgrims”. In total, D-A-D has released 11 studio albums.

THE ENTREPRENEURS – Say So at Tapetown Studio