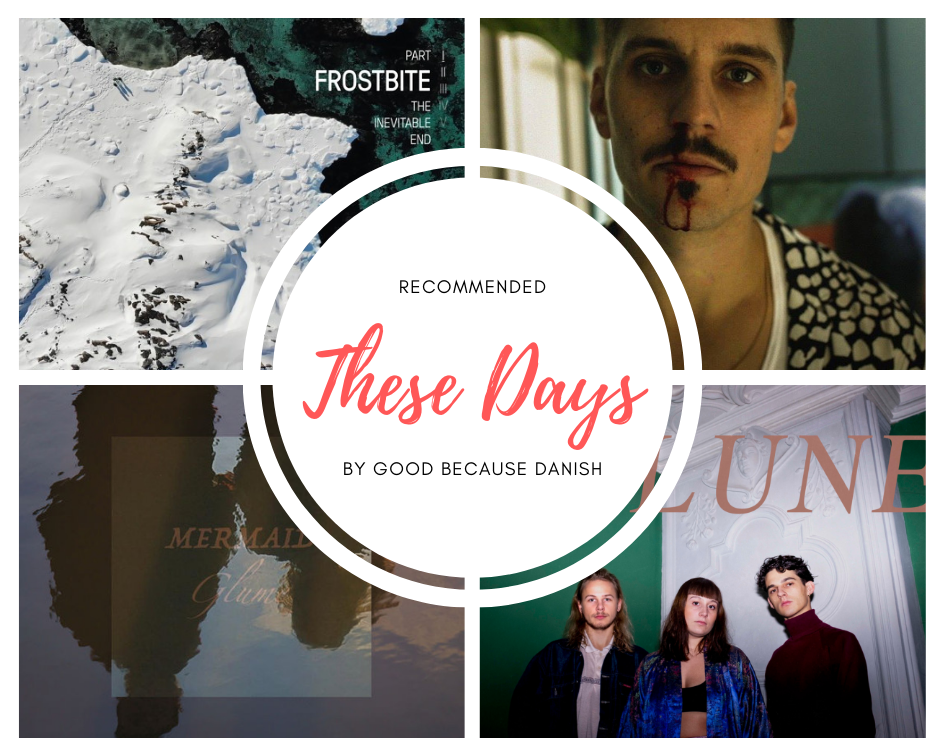 At Good because Danish we are all big fans of music (as you might know already). Each of us listens to a lot of different kinds of music and not only Danish tracks of course. But focusing on Danish music, there is a lot of stuff we like, but don’t manage to share with you on the blog in form of regular, longer posts. Therefore, we decided to combine our favourites Danish songs and releases into one post from time to time. So you wouldn’t miss any Danish music which we think is worth listening to.

These days I listen to…

This mesmerizing act already caught our attention with the debut single “You” and the whole debut album. The new song brings a breath of fresh, ice-cold air into the MALMØ music and I must admit, I don’t want to get warm. The beauty of the music combined with the threat and warning of the lyrics create a hauntingly beautiful mosaic. Read more about “Frostbite” on Good because Danish.

There is not much information about this duo-project from Copenhagen, but Glume definitely caught our attention on Good because Danish. Since it’s music that counts the most, we don’t need much more than just to listen to their second single “Mermaid”.

The combination of sweet vocals and rough guitar riffs, along with melancholic piano sounds brings to mind a cold morning under the ocean, with misty scenery and empty beach.

Doula brought us the single, which is on repeat 1 every morning since the day we heard it. Under the name there are three artists: Frederik Gøtzsche, Lasse Vistisen and Benjamin Fischermann, who will release a debut EP later this year and “Frozen Days” is the preview of the material.

The song has the groovy beat which definitely helps to get up in the morning, however the story it tells is not so funky and groovy.

“Frozen Days draws parallels between a cold and horrid day in winter, where the chilling wind hits you hard in the face, and being in a relationship gone cold” – tells doula about the song to the bandsoftomorrow.dk.

We can totally feel it in the song, at the same time being able to dance like crazy to it. The “Danishness” of doula’s music is definitely visible (or hearable?) in “Frozen Days”.

The thrill to discover an upcoming act, which is already a very well-aware of the musical direction they want to go to is unexplainable. Lalune is a band like that.

Their single “Malevolent” digests smoothly and leaves a nice feeling. It’s a very chilled out track. If you need a few minutes break from the craziness of the world, it’s a perfect way to do it. The musical side of the track is kept minimalistic, as the vocals. But “Malevolent” is not a simple song. It definitely builds the atmosphere, as you get deeper and deeper into it with every second.