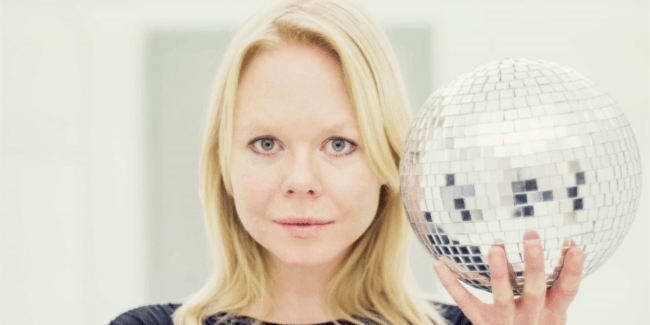 Enjoying spring in full bloom now, we are more than happy, that it is time for news tunes from Line. Yesterday she launched a new single Yellow moon together with the accompanying video, produced by Apperaat. The song, which will be the first track on her upcoming album, creates a very special atmosphere and drags you right into Line’s universe. But what is it, that makes the song so magical? Enjoy reading our small interview with Line and learn more about “Yellow Moon” and the upcoming album.

Good because Danish: “Yellow Moon” is a track that transports a magical feeling. Do you want to tell us a bit about what inspired you to write the song?

Line Bøgh: I tried to capture the sadness of a cold January evening in the city; one of these evenings where the bars are half empty because it’s freezing and it’s one of the last days in the month, so people have no money. And then I tried to find the magic in that.

I met my boyfriend on a night like that; I was out with a friend, and she was trying to figure out whether she should keep the baby she had just found out that she was carrying, and we were trying to go through the pros and cons of a very big decision. And then we ended up at a table with a guy who was drawing, and he became part of the whole discussion about the baby. It became more and more strange, cause I guess you are not supposed to discuss big things like that on a night where everybody is drunk, but sometimes you have to, I guess. And I ended up with the guy, and my friend had the baby, and everyone was happy.

When creating the video for “Yellow Moon” – was it clear from the beginning how you wanted the video to be or how did the story develop?

We wanted to bring in some strange elements that had to do with moons and nightlife; so we found a mirror ball and bought a lot of lemons. We wanted to create an atmosphere where I was kind of having my own party with the yellow moon. Apperaat (who did the video) had access to an old greenhouse and we filmed there after it got dark. It started to snow pretty heavily after a while, and it was really cold, but I think it was just right for the video to have some of that January cold in it.

Is there a special reason why you chose this song to be the first single from your upcoming album?

It was actually the last song that we recorded, but we were all quite excited about it. I think there is a lightness to it that I really like, and it has a certain sweetness and a strange magical feel. I think it was a good way to open up.

Your new album will be out in autumn – can you already give us a little hint of what we can expect?

I wanted to do an album that was minimalistic and had some naked and fragile elements to it. I’ve been working with two producers (David Elberling and Rasmus Glendorf), and we spend a lot of time working on mellotrons, choir sound and stuff like that.

The album is more simple, more “indie” in a way. You can hear a hand slip on the piano, and we even kept the cue vocals on a track. I guess it is in the borderlands between a “home-made indie sound” and a big, well-produced sound with lots of trumpets and trombones, big choirs and heavy beats. But then there is a certain rusticness to it all that I think works very well with the vocals and the subjects of the lyrics.

It is an alternative pop album with some folky elements, inspired by Sufjan Stevens, Tom Waits and Agnes Obel.  The album will be out in fall 2017.

For all of you, who don’t want to wait for Line’s new album and who happen to live in Germany – go see her on stage, performing with her sister Johanne Bøgh (ukulele, drum pad, vocals) and guitarist Rasmus Ploug.